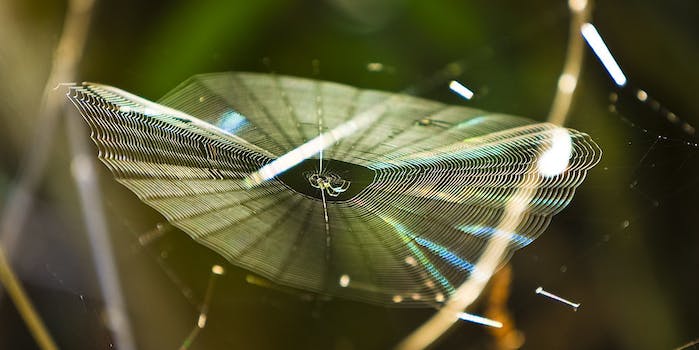 Watch the fascinating method spiders use to ‘tune’ their webs

Who guessed spiders were so musically talented?

Spider silk is amazing stuff. Its incredible strength and stretchiness has captivated researchers, and now a group from Oxford University has discovered a new attribute of these sticky strands. Spider silk can be tuned to different frequencies, like a musical instrument.

The spiders use this ability to monitor their surroundings. “By plucking a thread and reading the nature of the vibrations that come back, the spider can tell the difference between a tasty meal and a potential mate,” explained the narrator in a video from NPR. The arachnids also triangulate the vibrations they feel in order to locate the struggling prey or waiting partner.

Even if you find spiders to be creepy, the cute sound effects—especially the different chords played by meal and mate—make this video worth watching.

The researchers who discovered spiders’ musical abilities are part of Oxford’s Silk Group, which studies the biology of silks. Their report in the journal Advanced Materials describes how spider silk can vibrate in a wider frequency range than any known natural or man-made materials. They also observed that the spiders tune their webs by tightening individual strands, much the way humans tune guitars or other string instruments.

Studying spider silk could help engineers develop bio-inspired technology. For example, a material that responds to different sound wavelengths like spider silk could be used to make the hearing aids of the future. That’s some spider string theory for you.