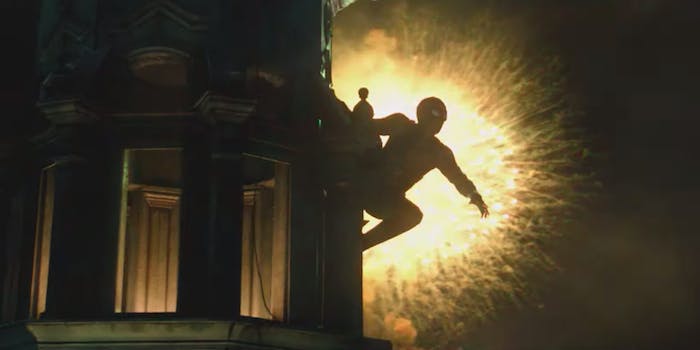 Night Monkey finally gets the trailer he deserves

'The night belongs to the Monkey.'

Night Monkey was, hands down, one of the best parts of Spider-Man: Far From Home.

Spider-Man‘s European alter-ego made an appearance early on in the latest Sony/Marvel collaboration. He was mysterious. Sleek. Maybe a little dangerous and most certainly not Spider-Man in disguise. He was a humorous addition to the plot that stuck with audiences long after leaving the theater. Yesterday, he finally got the recognition he deserves in the form of a clever trailer.

The trailer is, of course, for Spider-Man: Far From Home, which headed to digital release yesterday. Yet, seeming to play on the recent Spider-Man-related drama between Sony and Marvel, Spider-Man’s name isn’t mentioned once in the trailer. For all intents and purposes, the trailer appears to be for a film following a completely different, black-clad hero.

Particularly given the tragic loss of Spider-Man from the MCU, a decision that was confirmed by both Marvel and Sony back in August, this trailer is exceedingly clever. Not only does it lean on one of the most charming parts of the film, but it is acutely self-aware. Not long after the Sony/Marvel split was announced, after all, fans flocked to the jesting idea that Marvel could make Night Monkey a permanent member of the Avengers.

We won’t be so lucky, unfortunately. Spider-Man is out of the MCU for good—along will all his alternate identities—but not all hope is lost. We still have the five wonderful films with Tom Holland, who plays Peter Parker in the MCU. We still have timeless jokes about his “Peter tingle” and, of course, Night Monkey.

At least Sony is going forward with a smile. If the new trailer is any indication, Sony hopes to carry the same humor and charm from the MCU films into future releases. Here’s hoping we see plenty more Night Monkey in future Spider-Man films.