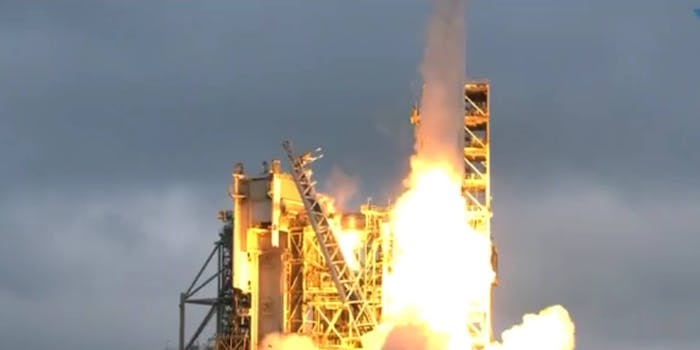 SpaceX successfully launched a rocket and returned its boosters safely to Earth on Sunday.

For the third time in the company’s history, one of its Falcon 9 rockets successfully launched and returned its first-stage boosters to land, with its boosters touching down just miles from where it first took off. The rocket reportedly took flight at 9:39 am ET, ascending from the historic Launch Complex 39A at Cape Canaveral in Florida, the very site from which the 1969 moon landing was launched, among countless other Space Shuttle missions.

Back in January, Elon Musk’s high-profile space flight company successfully launched a Falcon 9 and landed it on a drone ship in the Pacific Ocean. In this case, however, SpaceX managed to return the rocket’s first stage boosters to Cape Canaveral, providing some dramatic and breathtaking footage to boot.

Here’s what it looked like when the rocket both took off and landed. As many outlets noted, it marked the first time the historic launch pad has been used by a private rocket, rather than a government-funded one.

Mere minutes following the blast-off, the rocket’s first stage successfully returned to Cape Canaveral, albeit at a landing site a few miles from where it took off. Fortunately, there’s video of that part too, and it’s perfect for anyone who likes to daydream about the possibilities of space travel or anyone who simply wants salute the culmination of countless hours of work by the company’s world-class engineers.

According to CBS News, Sunday’s success means SpaceX has now safely recovered eight out of the 13 Falcon 9 first stage boosters it’s launched. Make no mistake, Musk was delighted with the successful return of the Falcon 9’s stage one boosters, as he posted a photo of the landing on his Instagram along with a simple message.

These sorts of successes will only make future launches more likely, especially as the process is fine-tuned and potential dangers continue to be smoothed out. It may have taken years, and some very embarrassing false-starts and flame-outs along the way, but it looks increasingly clear that SpaceX’s ambitions and achievements are on an upward trend.