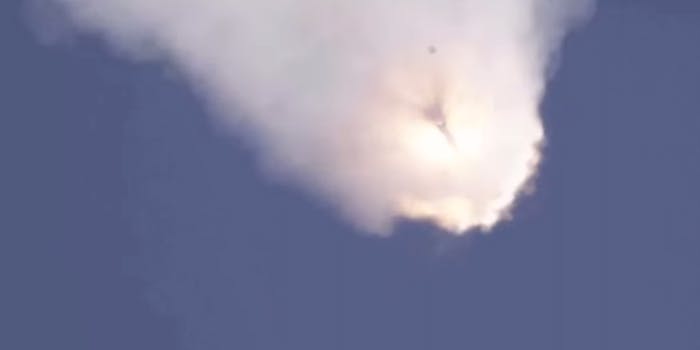 Thankfully, no one was hurt.

According to SpaceX, the spacecraft experienced an anomaly shortly after take off, and it disintegrated in the sky just under two minutes into the flight.

That's all we can say with confidence right now. Will have more to say following a thorough fault tree analysis.

“Falcon 9 experienced a problem shortly before first stage shutdown,” Elon Musk, CEO of SpaceX, tweeted. “Will provide more info as soon as we review the data.”

In a video posted to YouTube, you can see the rocket break up and disintegrate into a fireball.

This is the first failure for SpaceX’s Falcon 9 rocket, which has successfully completed 18 other missions. The rocket was meant to resupply astronauts on ISS, including bringing 4,300 pounds of food meant to last the crew through October. SpaceX planned Sunday’s launch to be the third attempt to land its reusable Falcon 9 rocket—a feat that could revolutionize space travel but that has eluded the company to date.

There are no reported injuries in Sunday’s launch, as the Falcon 9 was not carrying a manned spacecraft.

SpaceX’s Sunday event was livestreamed, so a full video of the rocket launch and subsequent disaster was available shortly following the explosion.

Prior to the conference, NASA issued a release on the failed Commercial Resupply Services 7 (CRS-7) mission:

“SpaceX has demonstrated extraordinary capabilities in its first six cargo resupply missions to the station, and we know they can replicate that success. We will work with and support SpaceX to assess what happened, understand the specifics of the failure and correct it to move forward. This is a reminder that spaceflight is an incredible challenge, but we learn from each success and each setback. Today’s launch attempt will not deter us from our ambitious human spaceflight program.”