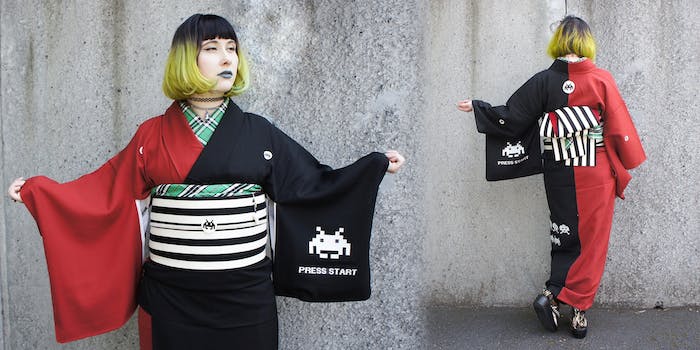 This remarkable fashion blogger made her own Space Invaders kimono

There's a lot more to her story than just a fabulously nerdy kimono.

The Tokyo-based designer earned some attention from the local fashion community when she decided to create her own Space Invaders kimono earlier this year. Then someone took a pic of her on the street wearing it and the photo went viral, drawing in more than a million viewers from all over the world. Suddenly, everyone wanted to know the identity of the girl with the geeky kimono. 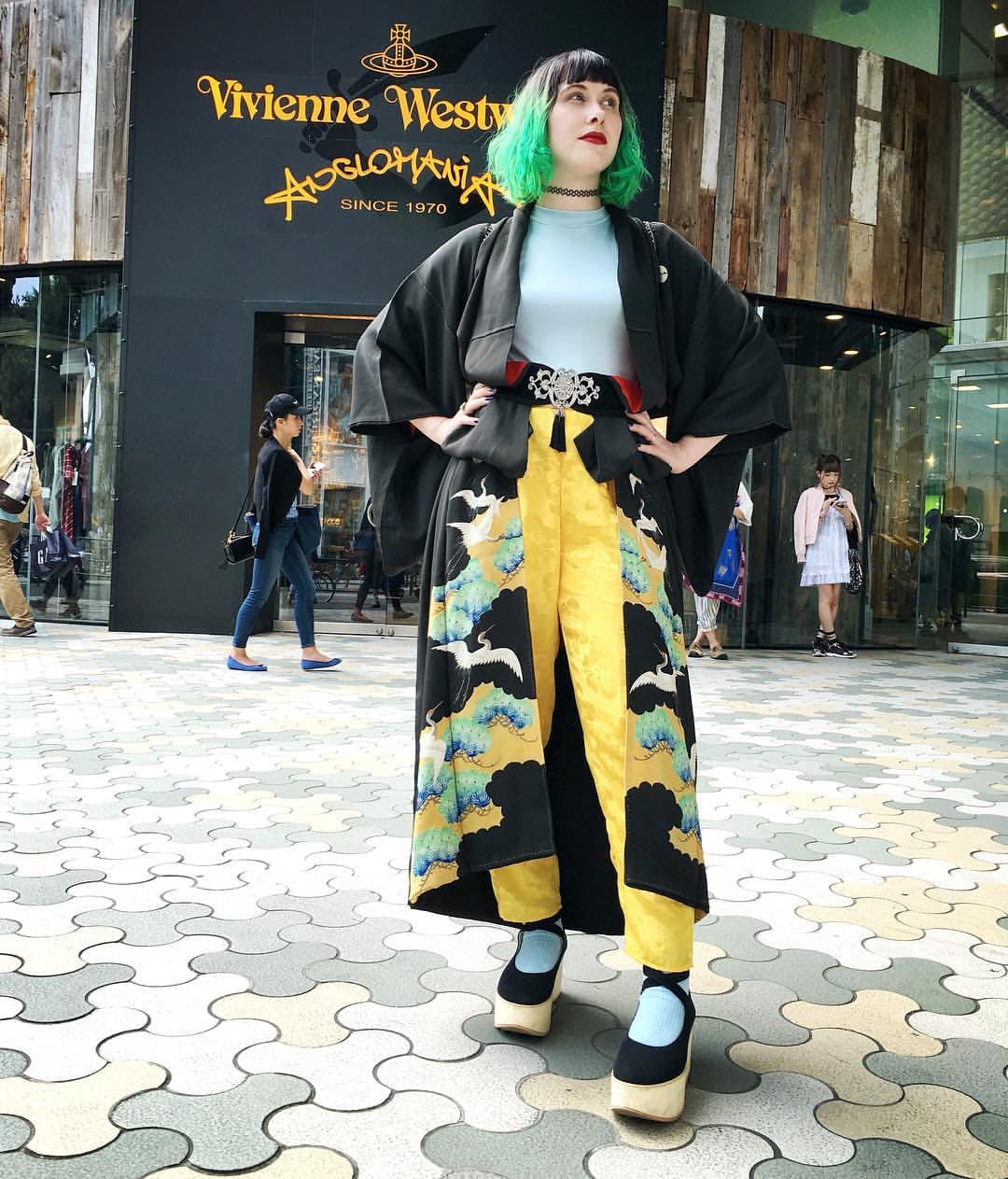 What’s interesting about Anji’s story is that the Space Invaders kimono, while terribly cool, is simply the lid on a much deeper well. After leaving her home country of Germany for a life in Tokyo, Anji has become a designer with a sharp eye for style and a passion for antique kimono. Her fashion brand, SALZ Tokyo, offers everything from street-savvy tees to stunning haori jackets, furisode kimono, and meticulously detailed obi belts. Anji is also heavily involved in the kimono fashion community in Tokyo and participates in meetup events regularly.

Anji tells the Daily Dot that she long wanted a half and half colored kimono, but they are incredibly rare and expensive. When she thought of the Space Invaders design, she decided to create her own.

“I love funky and wild designs,” she said, “but it felt naked being just one bold colour, so I let my mind slip and tried to think about something cool which wouldn’t have been made into a kimono yet. The Space Invaders [idea] popped into my head!”

Anji says that she created the kimono in about a day and a half and the supplies cost her about $40 (thanks in no small part to her extensive knowledge of kimono suppliers in Japan). She started with two summer kimono of similar sizes, which she cut in half and sewed together for the effect she wanted. The Space Invaders design was created with iron-on decals that Anji printed herself. 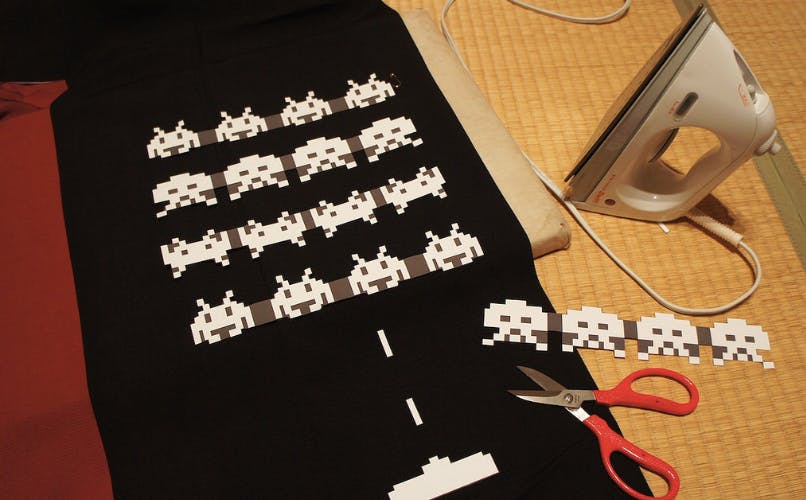 After pairing the design with a wide black and white striped obi belt, a Space Invaders obidome (brooch), and vivid tabi socks, Anji’s design was done, and the final result was bold and stunning. With a plaid green inner liner peeping out of the collar, which Anji matched with a richly pigmented lipstick, the look was enough to stop the hearts of gamers and vintage kimono fans alike. 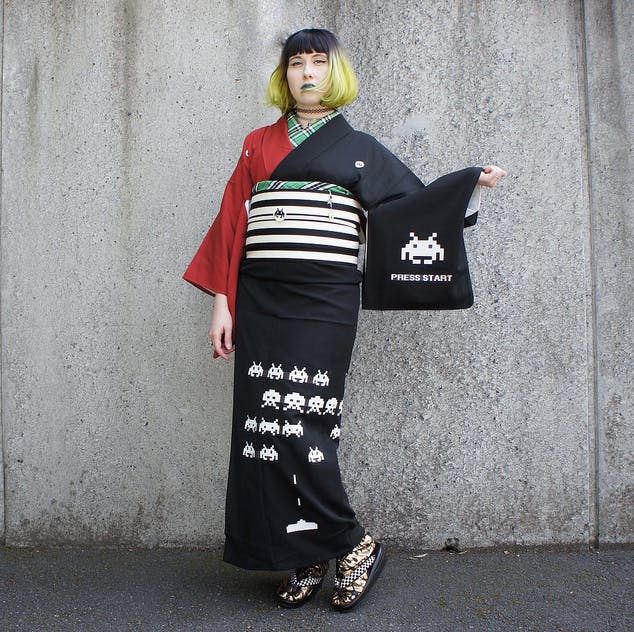 Anji posted a full DIY tutorial for the creation of the kimono on the SALZ Tokyo website, should anyone be adventurous enough to try their hand at making one of these beauties themselves. Or perhaps you could even design a Zelda or Mario-themed one, now that this one has paved the way for the idea.

Anji said her passion for vintage clothing was what led her to open SALZ Tokyo five years ago.

“I got so addicted with kimono that I thought they should be more accessible to people overseas,” Anji said. “Also I hand pick and hunt kimono mainly based on my own preferences and try to offer very unique, antique and modern kimono—something which can be hard to find in average kimono shops.” 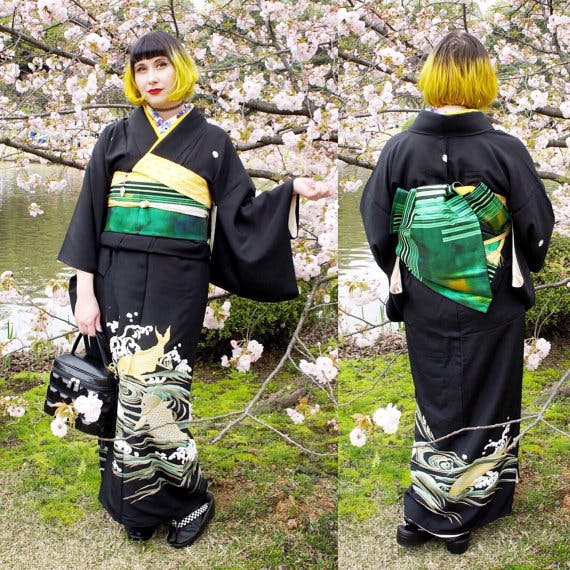 Anji’s favorite period of kimono fashion was in the 1920s.

Anji explains that kimono production has been slowly dying out since the 1950s, and the garments are worn mostly by older people and shunned by the young. But she says that Japan is coming back around on kimono, and she’s excited to see how designers are innovating with the classic style.

“Some new kimono brands emerged and created modern fun designs on inkjet printed polyester fabric—a revolution for the kimono and also finally more friendly prices for the wallet encourage people to dip back into Japan’s history without being out-of-date fashion trend wise,” she said. While kimono-inspired fashion is popular outside of Japan, wearing the real thing has its stumbling points. The typical silk kimono can be notoriously expensive, making it impossible to maintain a wardrobe without a large bankroll.  Younger Japanese people, inspired by the trendiness and affordability of American fashion, have moved away from Japan’s classics and toward a different sort of style that’s uniquely their own. But Anji believes that the art of kimono-making will draw people back to it in the long run, regardless of the cycle of fashion trends.

“In the case of antique kimono, they used to cost as much as a car or house back then and have been carefully passed on through generations, they survived war and natural disasters, people probably had great moments wearing them,” she said. “It is like a life story being passed on. To me a kimono is not just a piece of cloth—it somewhat has a soul.”

Anji also praises kimono for their effect on the body, which she describes as wholly unique.

“Wearing a kimono makes you move more gracefully,” she said. “Due to all the layers and obi belt, you can’t move as freely as with jogging pants, so your posture becomes straight, and your movements beautiful.

“I feel like a better, kinder person when I wear kimono, if that makes sense,” she said, laughing. Anji isn’t alone in her quest to make sure kimono are a part of the modern fashion world. Some of her favorite bloggers, like Choko122 and Marybird_Kawahara Maria , also straddle the line between classic and modern kimono fashion, adding their own details for freshness and style.

Anji says her heart grows heavy when she thinks of the richness of kimono tradition dying, and the vast knowledge of its artisans going to waste. That is why she created SALZ Tokyo and the reason she passionately creates and wears kimono: to ensure that the noble garment can inspire future generations, rather than gathering dust at the bottom of a drawer.

“I am on a quest to revive and show the world how great and fun Japanese kimono can be,” she said.