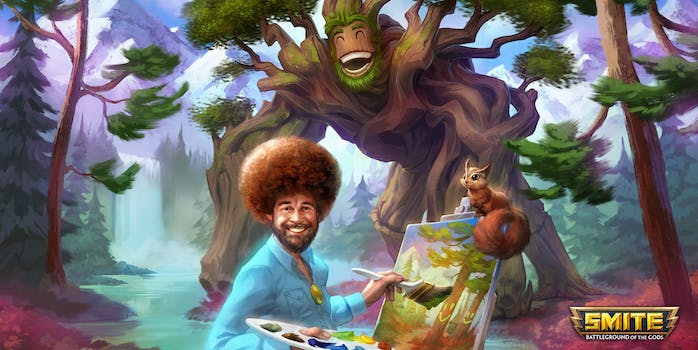 The joy of conquering your enemies.

That’s right, the super-chill painting guru Bob Ross has entered Smite’s battlegrounds. According to an announcement by Smite developer Hi-Rez Studios, the Ross Sylvanus Bundle adds a skin to convert the Roman god Sylvanus into the lovable PBS arts and crafts fixture.

“The Joy of Painting inspired artists across the game industry and the Twitch livestreams introduced Bob to gamers worldwide. We’re grateful to the Bob Ross estate and Twitch for enabling us to re-introduce and honor Bob Ross given the global Smite audience,” said Todd Harris, co-founder and COO of Hi-Rez Studios.

You can pick up the bundle for 700 gems or for $9.99 on Twitch Commerce, starting today for PC players and on May 16 for console. The full details are viewable here, but custom watercolor ability effects and the happy tree friend are definitely highlights of the bundle.

Members of the Smite community team will be showing off their best Ross art skills on the HiRezTV Twitch channel Tuesday from 3-5pm ET.

We can’t promise it will be as chill as your typical Ross special, but we can’t wait to see what painting magic they come up with.