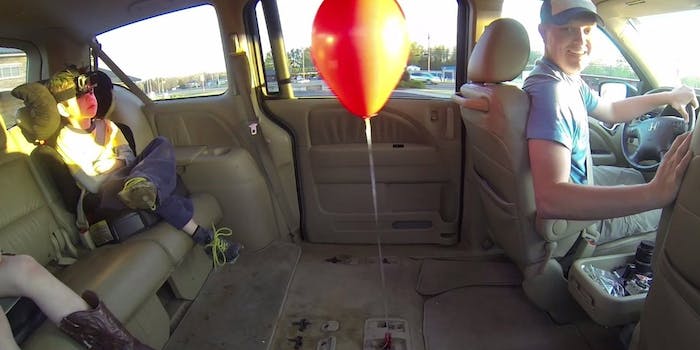 A balloon, a plumb bob, and a van make for a quick and fun science experiment.

Destin spends his work days testing missiles for the U.S. military, which basically means blowing stuff up for the sake of science. But in his off time, the sandy-haired engineer teaches his adorable kids the weird wonders of the physical universe. And luckily for us, he films the results and posts them to his hugely successful YouTube channel, SmarterEveryDay.

In his latest video, Destin, who won’t reveal his last name so his kids can maintain some privacy, employs a plumb bob, a helium balloon, and a grungy old van to edifying effect.

Why does the balloon move forward when the van accelerates, while the plumb bob swings backward?

For the same reason his two kids—one with a digital camera strapped to his head, the other sporting a pair of mud-covered cowboy boots—are breathing in just a tad more oxygen while they sit in the back seat.