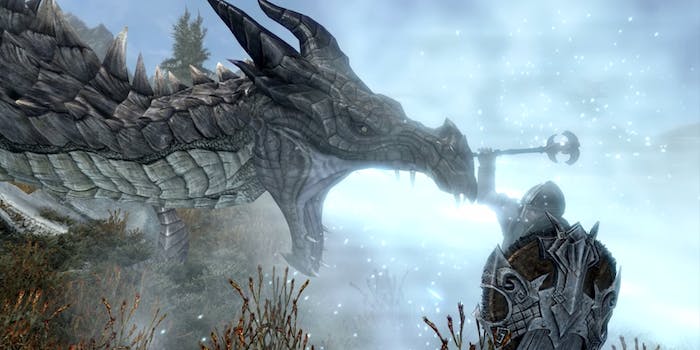 The 10 different races in ‘Skyrim’ and their unique perks

May you die with a sword in your hand.

It’s been nearly a decade since gamers took their first steps into Bethesda’s ambitious open world of Skyrim. Despite the long years that have passed, this groundbreaking game is still a fan favorite. So the question remains: Which of the Skyrim races is best for your play style?

There are so many ways to play Skyrim we may never get bored. It’s an open world full of wizards, elves, werewolves, and dragons, after all. Add the variety of play styles to the multitude of races—complete with varying stats and skill boosts—and each play-through feels like a different game.

You may have played Skyrim as an Altmer magicking your way out of any and every situation or a Dunmer using long-range and sneak to its fullest potential. But what about the other eight races? Each one offers completely different options, allowing players to carefully craft their characters.

Here are the Skyrim races and what makes them unique.

There are 10 playable races in Skyrim, all of which possess different strengths and weaknesses. Depending on your play style, you might prefer the strength of an Orc or the magical aptitude of a Altmer. At game start, each race begins with +10 in one skill and +5 in five other skills. Despite the clear directions these settings lay out, it’s possible to develop any skill as any race in Skyrim. If you really want a magically inept Orc to become the Arch-Mage, it’s all you. The path won’t be easy, but by Talos, what in Skyrim is?

The High Elves are the most magically adept of all the Skyrim races. If you’re not planning a long stay at the College of Winterhold, this race might not be for you. That said, let me note again that any race, regardless of starting stats, can learn any skill. It might not make much sense for your Altmer to abandon magic and dedicate their life to fighting with a two-handed ax, but you can certainly take that route.

The Altmer mostly reside on Summerset Isle, off the southwest coast of Tamriel. Their starting spells—flames, healing, and fury—are a perfect first step into the world of mage craft. These skills make you immediately dangerous in a fight. Plus, your healing spell negates the need for cooking meals or crafting healing potions. Additional skill bonuses go to alteration, conjuration, destruction, enchanting, and restoration, with extra points in illusion. They have 50 more Magicka than other starting races. Also, the racial power of “Highborn” grants Altmer the ability to regenerate their Magicka faster for 60 seconds once a day.

This reptilian Skyrim race is built for sneaking. Thievery, assassination, and concealment are staples of the Argonian. Many a wanderer have steered away from the Argonian’s home in the Black Marsh for fear of never leaving its swampy borders, due to the race’s emphasis on guerrilla warfare. Argonians are best for a player looking to emphasize thievery, sneaking, and light armor abilities. Daggers and small, one-handed weapons are most effective in the hands of an Argonian. If you want to ditch that and go all-in with a broad sword, however, more power to you.

Argonians are equally at home on land and in water, a rare trait in Skyrim races. Their natural immunities to their homeland’s diseases protects them as they travel the reaches of Tamriel. They can even breathe underwater when the need arises. Starting skills in light armor, alteration, pickpocket, restoration, and sneak encourage Argonian players to avoid combat when possible. Extra skill points go toward lock-picking, and this race’s natural 50% immunity to disease saves money on remedies and cures. To top it off, once a day any Argonian can recover health 10 times faster—but it only lasts 60 seconds.

If Legolas were a Skyrim character, he would belong to this race. The Wood Elves of Valenwood prefer a simple, natural existence. They live in harmony with the world around them, embracing the power of the land and its creatures. Players looking for a stealthy play-through emphasizing archery and nature will find the Bosmer particularly enjoyable.

A lovely balance of stealth and combat, Bosmer are one of the most flexible Skyrim races. While their inherent abilities encourage sneak and long-range combat, the Bosmer can be just about any breed of character you’re looking for. Their starting skills lie in alchemy, light armor, lock-picking, pickpocket, and sneak with a boost to archery. Some genuinely great bows can lend a similar skill in archery to non-Bosmer characters, but no other race has starting archery skill at their level. The addition of their special abilities—a 50% resistance to disease and poison and the ability to make an animal into an ally for 60 seconds—make the Bosmer one of the most versatile Skyrim races.

The first (mostly) human race on this list has just enough Elven blood to give its magic abilities a serious boost. An exceedingly clever race, Bretons are known for their skill in abstract thinking. Their home in the province of High Rock houses far more of this race than many other areas in Tamriel. Therefore, far fewer Bretons wander the world than many other races.

Another excellent option for a player looking to fuck some shit up with magic, the Bretons have starting boosts to their magical and alchemical skills. With a good potion, you can do just about anything in Skyrim, so a talented alchemist can be exceedingly useful. Starting skills in alchemy, alteration, illusion, restoration, and speech make Bretons a great starting race. An extra boost to conjuration can give you a helping hand in any fight. In addition, Bretons gain an extra boost in magical combat thanks to their ability to absorb 50% of the Magicka from a hostile spell for 60 seconds a day. On top of that, Breton blood has a 25% resistance to magic, so brawl with mages to your heart’s content.

The Dark Elves do not have the same levels of magical aptitude as their High cousins or the archery skill of their woodland counterparts. Instead, this Skyrim race boasts characters that are versatile and unique. Hailing from the province of Morrowind, Dunmer are perfect for players pursuing different play styles.

These dark-skinned Elves are the focus of extreme prejudice throughout Skyrim. Forced to abandon their original home following the Red Mountain’s eruption, many residents treat the Dunmer as second-class citizens. They are known for their strength, intelligence, and agility, and they make excellent hybrid mage-warriors. Starting skills in alchemy, alteration, illusion, light armor, and sneak assist the Dunmer in their versatility. Add their extra boost in destruction, and your opponents won’t know what hit them. Special abilities include “ancestor’s wrath,” which for 60 seconds a day causes flame damage to anyone who gets too close. Unfortunately, this ability extends to guards, so use it with caution. Dunmer blood also lends them 50% resistance to fire. Plus, it gives them an additional starting spell: spark.

The Imperial are Tamriel’s backbone. This race dominated the continent for more than 2,000 years before the Skyrim story begins. These well-educated, tan-skinned fighters make excellent traders and merchants. Their aptitude in discipline, not to mention their skill as diplomats, has helped them remain on top.

Imperials are less physically capable than many other Skyrim races. However, they balance their combat skills with a number of more intellectual and monetary pursuits. Players looking to rely primarily on close combat—rather than stealth or long-range combat—should consider an Imperial character. Starting skills in block, destruction, enchanting, heavy armor, and one-handed combat give anyone looking for a traditional warrior play-through an excellent base. Additional stats in restoration lessen the need for health potions or food. Also, the ability to find extra gold when scavenging makes most Imperials wealthier than the average character. Imperials also boast the Voice of the Emperor ability, which calms nearby humanoids for 60 seconds a day.

The Khajiit are a beast race that wander the continent in relatively large numbers. Originally from the province of Elsweyr, the Khajiit are easily recognizable thanks to their feline appearance. Others tend to look on this Skyrim race negatively, thanks to their inhuman appearance and rampant racism in Tamriel. It seems even Skyrim is inspired by reality.

Anyone looking to dive into a play-through as a thief or assassin will enjoy playing as a Khajiit. Starting skills in alchemy, archery, lock-picking, one-handed, and pickpocket make the perfect recipe for a stealth character. Add the boost in starting sneak skill plus the Khajiit’s natural ability to see in the dark an unlimited number of times a day, and there are few better choices for this type of character. The Khajiit also come with cat-like claws, which add a boost to unarmed combat no matter what. In other words, losing all your gear after getting arrested isn’t a total bust. You can still go to town on those guards with your built-in murder weapons.

The only entirely human race in Skyrim is capable of just about anything. Talented warriors, blacksmiths, merchants, and mercenaries, Nords make up the majority of Skyrim‘s population by far. These fair-skinned fighters are known for their resistance to all types of cold—even magical. They make up the vast majority of the Stormcloaks and are naturally capable seamen.

Players looking for a warrior-type campaign will enjoy the play options for a Nord. Their starting skills in block, light armor, one-handed, smithing, and speech lend to a traditional play-through full of trading, creation, and straight-forward combat. Extra skill points in two-handed encourage players to try a heavy broad sword or crushing ax rather than the traditional sword and shield. To top it off, Nords’ battle cry can be used once daily to terrify enemies into fleeing for 30 seconds. Nordic blood gives players 50% resistance to frost, but their general lack of magical aptitude makes them a poor choice for magically inclined players.

Orsimer, or Orcs, are the physically strongest—and magically weakest—Skyrim race. While many of Skyrim‘s people consider them barbarians, the Orsimer have a sophisticated, complex society. Natives of the Wrothgarian and Dragontail Mountains, Orcs have been wandering the reaches of Skyrim for decades.

Orcs are a relatively common sight throughout Tamriel. Camps full of these beefy warriors are littered around the playable area, though entering them isn’t easy. If you aren’t playing as an Orc, you must complete a quest to become “Blood-Kin” before many Orc interactions can be unlocked. If you are playing as an Orc, you can interact with your brethren from the start. Skills in block, enchanting, one-handed, smithing, and two-handed lend to Orcs’ fighting prowess. Thanks to their boosted skill in heavy armor, you can finally don that epic-looking dragon armor. While Orcs are notoriously bad with magic, they can learn the skill. Their special skill— a berserker rage—allows Orcs to take half damage while dealing double for 60 seconds a day.

Natives of Hammerfell, Redguard are well-known for their skill as warriors. Renowned as the greatest warriors in Skyrim, these dark-skinned fighters are proficient in the use of any and all weapons. Stocky and quick, not to mention hardy as all get-out, the Redguard are perfect for a player looking to slash their way through Skyrim‘s dangerous reaches.

Many of this Skyrim race veer more toward expertise in physical fighting than mystical. Though they have no particular block to using Magicka, the Redguard emphasize skill with weaponry. Their starting skills in alteration, archery, block, destruction, and smithing give them a well-balanced launching point. Additional skill in one-handed encourages combat with a sword and shield, or perhaps double-wielding one-handed weapons. Redguard blood lends a 50% resistance to poison, and their “adrenaline rush” ability allows players’ stamina to regenerate 10 times faster for 60 seconds a day.