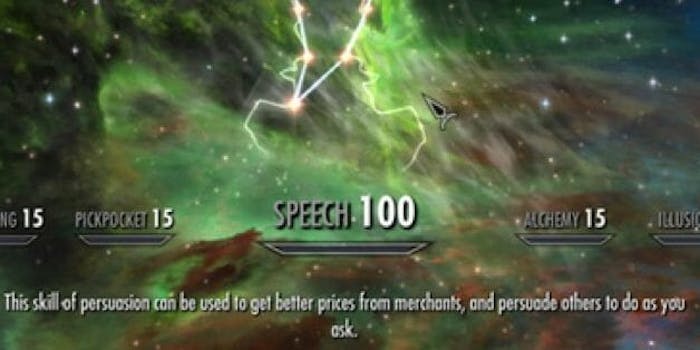 Skyrim memes have leveled up.

Skyrim, perhaps the most iconic open-world roleplaying game of all time, is nearly six years old now, and it’s been a long time since lines like “then I took an arrow to the knee” ruled the meme world. But everything old is new again, and Skyrim is suddenly back on the meme scene. This week’s hot meme uses the Skyrim skill tree, which shows how good your character is at various tasks.

In Skyrim, the Speech skill is useful for haggling down prices in shops and persuading other characters to do what you want. In real life, it’s good for talking your way out of prison, whether you’re an escapee,

or Casey Anthony, who was acquitted of manslaughter charges in the death of her toddler,

or a U.S. president.

And if you don’t have Speech skills, things can go very badly for you:

But Speech isn’t the only Skyrim skill people are meme-ing. Let’s see what 100 points in Sneak, Block, and other useful abilities would look like in real life:

This meme is prominent on r/dankmemes, which is focused on controversial, “edgy” subjects (so much so that the moderators recently made a bingo card summarizing all of them). As a result, some of the examples are raunchy or otherwise offensive. That’s not to say they’re not clever, though.

The meme can also be used to make pop culture references, like this Breaking Bad example, where Walt and Jesse level up their crystal methamphetamine production:

or this Minecraft interpretation of the Heavy Armor skill:

Despite being based on a five-year-old game, this meme has some legs. There’s the nostalgia factor, of course, but there’s also a lot of room for innovation here. Skyrim has 18 different skills, many of which haven’t yet been explored on r/dankmemes. If the meme makes the jump to gaming forums or the “normie” internet of 9gag, iFunny, and Facebook, its full potential could be unlocked.