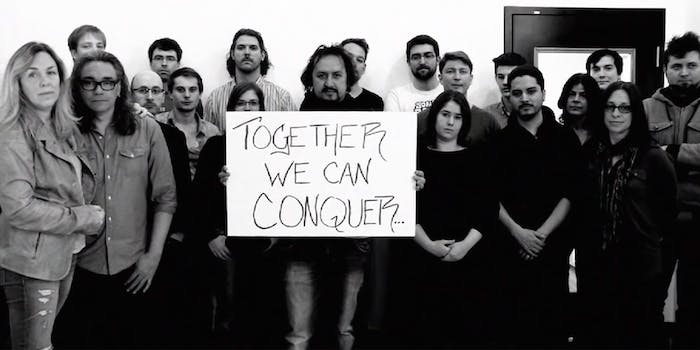 ‘Papo & Yo’ creators will release ‘Silent Enemy’ in October for iOS

Caballero made the announcement during his keynote presentation on Thursday at the 2014 Games for Health conference in Boston. Caballero told the Daily Dot via email today that the game will first be released on iOS devices, with other platforms to come later.

Caballero is at Games for Health because he wants to put Silent Enemy, a game about surviving the abuse of being bullied, into the hands of those who can use it. The means violence, bullying, and abuse prevention organizations, youth-related associations and professionals, school boards, and people who create education-focused media.

Papo & Yo was released in August 2012 and quickly became one of the most celebrated titles to emerge from the indie game scene. The hero of the game, a Brazilian boy named Quico, escapes his alcoholic father by entering a magical favela. The player controls Quico and solves puzzles to progress through the game.

Quico is accompanied by Monster. Monster is most often docile, and helpful in assisting Quico with solving his puzzles. Every so often, however, Monster can become hostile and hinder Quico’s progress. The game is a metaphor for Caballero’s real-life experience as a survivor of an alcoholic parent.

Silent Enemy is based on the experiences of Ernest Webb, Caballero’s partner at Minority Media, and Ruben Farrus, the game’s creative director, who were bullied horribly as children. And while both Papo & Yo and Silent Enemy will be referred to as “indie games,” Caballero doesn’t think that label is enough—or even appropriate at all.

“What [Papo & Yo and Silent Enemy] have in common, and what we do at Minority, is three things,” Caballero said. “First, we make games from the point of view of the victim. We put you in a losing situation, with no big guns, or big powers. You are the weakest person in the whole game.

“Second, we don’t solve problems through violence. When I was a kid, I remember playing Mario [games] to escape my reality. My father was a terrible father, and I played games to escape it. I played hours and hours against King Bowser, until my thumbs hurt. But when I dropped the controller, nothing of what I did there actually helped me in my real life. I cannot go there and jump on my father, or come out with a big ball [of fire] and burn him. So in the case of Silent Enemy, we cannot give our character a shotgun to get rid of these enemies.

Caballero represents the ubiquitous tale of game developers leaving the triple-A video-game industry to work on projects they find personally meaningful and fulfilling. Caballero was the designer director at EA Montreal from 2004 to 2010. Among the intellectual properties he created for Electronic Arts was the shooter franchise Army of Two. Many of the employees at Minority Media are also escapees from the triple-A industry.

“Our team had worked on the most violent games you have ever seen in the past 10 years, having terrible stuff in those games,” said Caballero. “Sniper mechanics, torturing mechanics, you name it. And it’s terrible, but me and my team, we learned how to make games.

“Getting older, and having families, we started thinking, ‘Maybe we have a responsibility with what we’re doing?’ Something I found really terrible is when I was a kid, if someone came to my class in high school and asked ‘What is an AK-47?’ no one in the class would know. Now you can go to every high school in North America and ask what an AK-47 is, and everyone would know. ‘What is the firing rate of an AK-47?’ and they know that, too. It’s terrible. We keep passing on all this knowledge of warfare. So what we want to do is we want to change that.”

Caballero compares action games to action films. You need a gun to get to the end. Empathy games, on the other hand, are like drama films. They are games that talk about the hardship, and the beauty, of being human.

Caballero believes that Minority Media has achieved this goal again with Silent Enemy. The game is finished, but releasing Silent Enemy into the commercial sector isn’t enough this time. Caballero wants to do more, and he needs help from the professionals who are attending Games for Health 2014.

“We know how to do this as entertainment. We know how to do PR in the gaming media. What we don’t know is how to get this in schools,” Caballero said. He offered a build of Silent Enemy to anyone in the audience who was willing to play the game and share their feedback on whether Silent Enemy could be incorporated into their programs or curricula, or to suggest other places where the game could be put to good use.

“We look at this from the point of view of artists. I don’t know how it works in academia,” Caballero said. “In the game, we bring the experience of being bullied and overcoming bullying. People try to avoid feeling bullied, but I believe that if you go through a harsh experience in a controlled, secure environment like a game, that it could actually help you deal with the subject in a better way.”