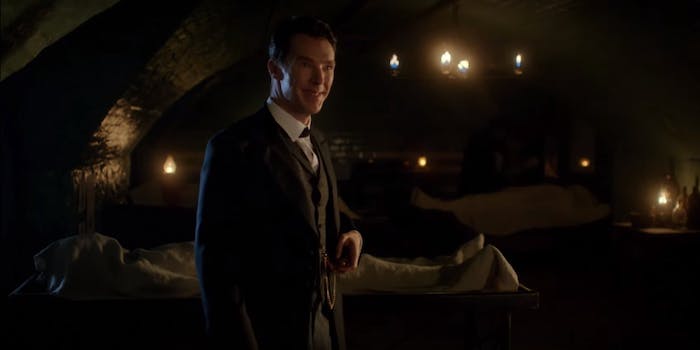 Will the ‘Sherlock’ Christmas special give Holmes and Watson a fresh introduction?

And it's none too friendly.

This year’s Sherlock holiday special reintroduces Holmes and Watson in a new (ish) setting, Victorian London. But will it also reintroduce them to each other?

The latest Sherlock teaser suggests that we may see Holmes and Watson’s first meeting once again. Mirroring their introductory scene in the show’s pilot episode, Watson’s friend Mike Stamford returns, bringing Watson to visit Holmes in the morgue.

“Nice reflexes,” says Holmes, after tossing his cane at Watson’s head. “You’ll do.” It almost sounds like they’ve never met before, right?

So, are we going to see Holmes and Watson partner up for the first time all over again? Probably not, since an earlier trailer implied that they had worked together before. Either this is a flashback scene, or it’s some kind of fake-out. This being Sherlock, it certainly wouldn’t be the first time.