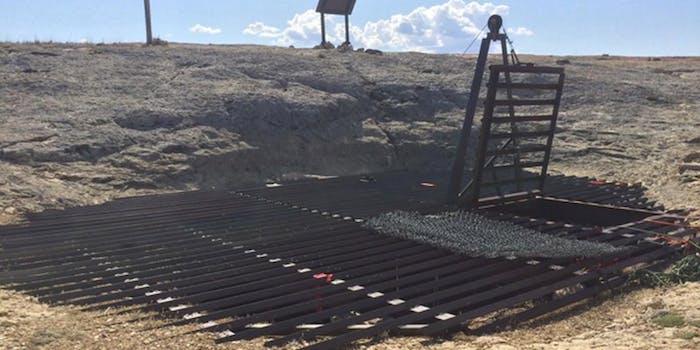 Scientists are livetweeting a major fossil dig in Wyoming

Watch a fossil dig from the comfort of your computer.

In a dry, starkly beautiful part of Wyoming, there’s a hole in the ground. You might not notice it. You might literally stumble into it, fall to the bottom, die and gradually become one of the many skeletons in a 30-foot-deep pile of bones in the cool, dark interior. (At least if the Bureau of Land Management hadn’t installed a safety grate over the entrance of Natural Trap Cave.)

The cave is 80-feet deep and home to fossils from 20,000 years ago. More than 30,000 specimens including cheetah, short-faced bear, mammoth, lion, and camel have been excavated from the cave, according to the National Park Service. For the first time in more than 30 years, scientists are now rappelling down into the depths to make discoveries.

Making preparations to descend for the first full day of work. #NTCave14 pic.twitter.com/AnMR1JAPsn

The crew is tweeting not only about the work but also about the area of Wyoming they are visiting.

Around 2:30 AM, I got to play “How many coyotes are there?” as a group of them came into camp and yapped their little heads off. #NTCave14

The cave is dark, cold and clammy, but worth it.

“Natural Trap Cave is a world class paleontological site. It is a site that is known throughout the scientific community, and it’s one that has a tremendous story yet to be told,” says Brent Breithaupt, a Wyoming paleontologist from the BLM, in a story on KULR8.com.

One of the major goals of the work will be to extract mitochondrial DNA from the bones, a feat that wasn’t technologically possible during the last excavation.

“It’s so cold all year long, that it has got just the perfect conditions for preserving DNA, in multiple species, in large numbers of individuals,” lead scientist Julie Meachen, a paleontologist from Des Moines University, told the San Jose Mercury News. “Which is not really found anywhere except Siberia and the Arctic.”