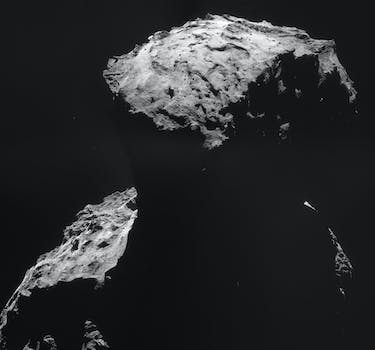 These videos explaining the Rosetta mission are adorable and amazing.

The Rosetta spacecraft is currently circling a comet, looking for a good spot to make the first soft landing on a comet. For those of you waiting with bated breath for the scheduled touchdown on Nov. 12, the European Space Agency (ESA) has released an animated video that will make you love the probe and rover even more:

And for those of you wondering what all the excitement is about (and who are now perhaps intrigued by this adorable duo), welcome to the story about Rosetta. The mission’s goal is to look at the comet—referred to as Comet 67P/Churyumov-Gerasimenko—for clues about the early Solar System. The probe was launched in 2004 and has flown by two asteroids and swung by Mars on its journey to the comet. Several orbits around Earth helped the spacecraft build up speed to send it on its way.

The adorable animated short isn’t the only multimedia presentation getting us hooked on this story. The science-explaining powers of many creative people are at work here. Take this amazingly produced short film “Ambition,” a collaboration between the ESA and Platige Image and starring none other than Game of Thrones star Aiden Gillen (speaking with his native Irish accent!) and Italian actress Aisling Franciosi. The actors play a master and apprentice who have the ability to create worlds. And the information gleaned from the long-ago Rosetta Mission is critical to today’s lesson. (OK, maybe this sounds cheesy, but the short film is seriously awesome.)

The short film ‘Ambition’ and the Rosetta mission is a reminder of what American ambition accomplished in the 60’s – Apollo, and the 70s – the Viking Landers, but then it began to falter in the 80s. The ambition of the Europeans did not lose site of the importance of comets. They are perhaps the ultimate Rosetta stones of our star system. They are unmitigated remnants of what created our planet billions of years ago unlike the asteroids that remained close to the Sun and were altered by its heat and many collisions.

Rosetta arrived at the comet in August, and we’ve already received a wealth of photos of the comet. But the best discoveries we’ll make about this comet and how are solar system formed are yet to come.