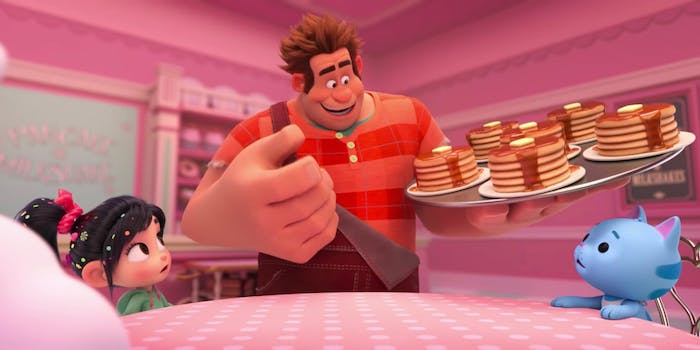 It's got a bit of everything.

The last time Wreck-It Ralph (John C. Reilly) left his game and stepped outside his comfort zone, he almost broke several games in an arcade. Now the first teaser for Ralph Breaks the Internet: Wreck-It Ralph 2 shows just how much bigger of an arena he has to accidentally decimate.

Now that the arcade has Wifi—or “wif-fee,” as Ralph pronounces it—he and Vanellope von Schweetz (Sarah Silverman) are sucked into the middle of the internet. According to the official synopsis, they’re looking for “a replacement part to save Vanellope’s video game, Sugar Rush.” With old-school characters in a high-tech realm, hijinks ensue.

And it’s got a bit of everything: spam, clickbait, eBay, and the allure of a sad cat photo, and a sequence featuring a zen game that ends up being anything but.