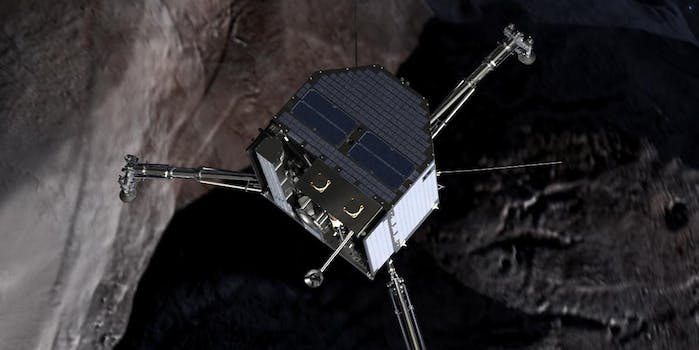 What’s next for the Philae comet lander now that it’s awake?

What's next for Philae, the first Earth vessel to successful land on a comet?

Everyone’s favorite robotic comet explorer, the European Space Agency’s Philae lander, woke up this weekend. The next step for the lander depends on how much sunlight Philae can absorb with its solar panels.

“We can already tell that all lander subsystems are working nominally, with no apparent degradation after more than half a year hiding out on the comet’s frozen surface,” said Philae project manager Stephan Ulamec.

The lander is currently receiving 135 minutes of solar energy per day as Comet 67P/Churyumov–Gerasimenko rotates during its orbit around the sun. With Philae still in good condition after 211 days of hibernation, this bodes well for future transmissions back to Earth.

What a great picture @ESA_Rosetta! #67P is amazing! Nice to see what my new home looks like from orbit as we approach the Sun #Lifeonacomet

I’ve sent data back to Earth & now my team (the best of the best) is hard at work! Thank you @DLR_de #LCC! #lifeonacomet

The distance between Comet 67P and Earth means that Philae cannot be controlled “live.” Instead, ESA technicians need to learn more details about the lander’s environment before sending preprogrammed instructions for it to perform tests on the comet’s surface.

The first step will be to establish a stable connection between Philae and Earth, as this weekend’s first new transmission was still rather weak. This will probably involve making sure that Rosetta, the ESA spacecraft orbiting the comet and relaying transmissions between Philae and Earth, is in the best possible position to do so. Then, Philae will use small, noninvasive instruments—no drills or hammers—to begin energy-efficient tests on the comet, sending small quantities of data back to scientists at ESA.

Thought I’d feel lonely on #67P but thanks to your support & messages I don’t. Thank you! Can’t wait to tell you more about #lifeonacomet !

Photo via DLR/Wikimedia Commons (CC BY 3.0)