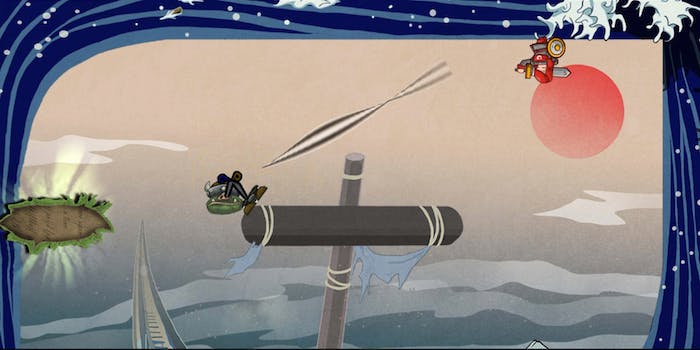 Paperbound brings 4-player brawling back to your living room

You might not tap Paperbound for serious competition, but it's perfect for a party.

Four-player couch competition is back, and it’s in the form of the arena fighter.

The last generation of video game consoles seemed to lack some memorable four-player games. In the generation before that, we had Goldeneye, Twisted Metal, and Power Stone, as well as staples like Mario Kart and Smash Bros. With the PS3 and Xbox 360, there was a dearth of this type of content. As online infrastructure improved, gamers found themselves playing with friends online rather than in living rooms.

Well, this generation is bringing couch multiplayer back with arena fighters. Apart from the crowned king that is Smash Bros., we’ve already seen games like Towerfall: Ascension and #IDARB taking over living rooms.

Paperbound is a new arena fighter from indie developer Dissident Logic that wants to bring a bit more chaos to the genre.

Paperbound is a super-fast, four-player brawler that can be played with friends or with bots. The goal of the game is to activate and get to your portal before your opponents get to theirs. The first person to get a set number of kills will be able to open his or her portal. Once open, the player must get through to his or her portal before getting killed. If two players have already met their portal-opening kill thresholds, then the player with the highest kill count will have his or her portal activated.

Each player can attack, throw a single pair of scissors, or lob an ink bomb. To add more insanity to the mix, the press of a button can also switch a player’s gravity. That means players are not only running around the stage, but flying across it too.

Since kills are abundant, the idea is to get the kill on your opponent as fast as possible. This can lead to players mashing their attack buttons and flying every which way to dodge attacks and better their positioning.

It’s a format that’s a lot of fun and can get a group of people yelling at the TV screen.

This frantic gameplay comes at a cost. It can get so chaotic players may lose track of where they are. Things are moving so fast, it’s a better strategy to mash the attack button rather than trying to outwit your opponent. Doing such a thing in a game like Smash Bros. or Towerfall: Ascension would surely be your downfall. In those games you have to play a bit more conservatively. Throwing out attacks or shooting all your arrows leaves you open for counterattacks.

So Paperbound is a game that’s easy to learn, but doesn’t really have room for mastery. It’s more a luck of the draw. The first person who squeezes their attack in first will get the kill.

This relegates Paperbound to a party format only. It’s hard to see it being played in depth or in a hardcore competitive environment. Because the game is easy enough to pick-up, I can definitely see it being a fun romp at gatherings, but that’s about it.

The most important part of an arena fighter is the arena itself. I noted in my Smash Bros. for 3DS review, that although there were more stages than any previous Smash Bros. game to date, the number of competitive stages were remarkably thin. Sure enough, in competition play we mostly see the same three stages on repeat. There are some unique stages in Paperbound with interesting gimmicks, but other than being mild diversions, I see players sticking to simpler arenas that allow for the fairest combat.

Criticisms about mechanics aside, Paperbound does look cool. The art style is unique, and I admire Dissident Logic for not going with the overused 8-bit aesthetic. But even with the more stylized art, it does lack that final layer of polish—one that makes you stand back and really appreciate the visuals. It does look at times like a flash game you would play in your school’s computer lab. But there are some cool character cameos, including Juan from Guacamelee and Captain Viridian from VVVVVV.

Paperbound is a game of reflexes. One that will have players not looking at their own characters, but rather at the stage as a whole. Just because a game puts onus on reflexes doesn’t make it a masterful arena fighter. There has to be room to breath, to out think an opponent, and get in their head.

Paperbound does a lot of things well, but mechanically it’s a bit too shallow when compared to the more hardcore arena fighters out there. The concept is cool, and has a unique enough twist, but it is a game that will work best in more casual environments.