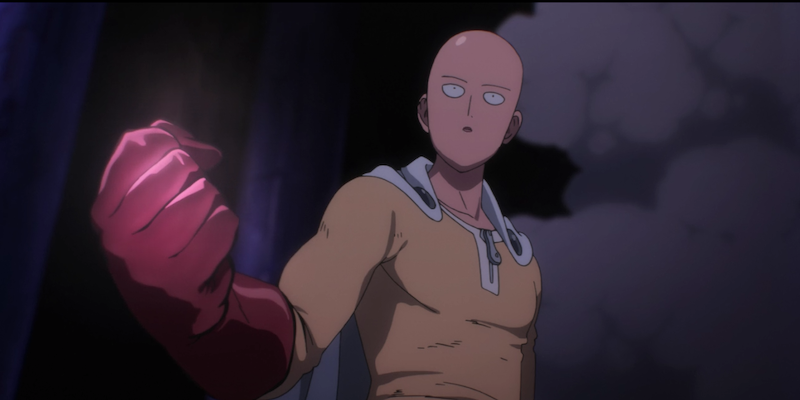 Everything you've ever wanted to know about the most powerful punch in the universe.

Much like its unassuming hero, no one expected One-Punch Man to become a worldwide phenomenon when the series first launched. From its humble manga roots to its animation domination after the release of just one season, One-Punch Man is the comedy superhero the world needs during these dark and trying times.

Season 2 is on the way sometime in 2018, leaving you plenty of time to brush up on your favorite One-Punch Man trivia. Here are the most important facts you need to know about the man with the most powerful punch in the universe.

1) One-Punch Man started online, moved to paper, then to your screen

Your introduction to One-Punch Man, aka Saitama, was most likely via the acclaimed anime series, but the hero actually started as a webcomic. Created by the anonymous named manga artist ONE, the comic launched online in early 2009, receiving almost 8 million views by June of 2012. You can read it here, provided you know Japanese. Like many webcomics, One-Punch Man’s art gets better as it goes along.

While other superheroes get wardrobes full of flashy outfits, covering spikes, chains, and armor, One-Punch Man wanders the world in relatively subdued threads. Beyond the flourish of his cape, One-Punch Man wears a simple yellow jumpsuit and red boots and gloves. Even his bald head and subtle eyebrows bypass more expressive anime looks. This was intentional. ONE designed One-Punch Man’s look to be subtle because there are already so many cool-looking characters. Rather than focus on making One-Punch Man look flashy, ONE believed his character’s coolness should come from who they are not how they look.

Beyond giving One-Punch Man an unassuming look, the character’s outfit also serves as a tribute to a beloved children’s character. Anpanman, a superhero with a jelly pastry for a head, starred in a manga that ran from 1973 to 2013, and in an anime that debuted in 1988 and still runs to this day. The show is verified as the Guinness World Record holder for the most characters in an animated franchise, with 1,768 characters appearing on the show and in movies between 1988 and 2009. If you look at One-Punch Man’s outfit you can see that it’s just a color-reversed version of Anpanman. In addition, the two characters share names that clearly explain the premise of their abilities.

In episode 1 of the anime and chapter 2 of the manga, fans are introduced to the generously named Split-Chinned Kid, a child with a chin that bears a striking resemblance to testicles. After drawing a pair of nipples on sleeping Crabrante (a humanoid crab character), the Split-Chinned Kid finds his life in danger as the monster lashes out. The intervention of Saitama, before he formally became a hero, is the only thing that saves his life. Little did One-Punch Man know the boy was the grandson of multi-millionaire Agoni, who is so inspired by Saitama’s deed he forms the Hero Association.

During the season 1 finale, One-Punch Man finds himself face to face with Boros, a being almost as powerful as he is. Boros kicks Saitama so hard he flies from Earth to the Moon, only to discover that Saitama is able to jump back to Earth on his own in roughly 1.5 seconds. If the Earth is 238,855 miles away from the moon, and it takes 1.5 seconds to get back to Earth, Saitama is going 159,236 miles per second. The speed of light is 186,282 miles per second. Given Saitama merely jumped and didn’t charge up or get a running start, it is easy to presume his actual top speed when he’s really trying could be pretty close to the speed of light. Right before he dies Boros himself exclaims the hero isn’t using his full power. You can watch the whole the jump for yourself right here.

Almost nothing causes One-Punch Man to break a sweat, but that doesn’t mean classifications don’t come in handy from time to time. On Saitama’s Earth threats are rated on a five-point scale. Level one is Wolf, meaning the appearance of a standard threat that requires one B-class hero or three C-class heroes, ranked by the Hero Association, to defeat. The Tiger class is a threat that puts many lives at risk, requiring one A-class hero or five B-class heroes to defeat. A Demon threat puts a whole city at risk, requiring 10 A-class heroes or 1 S-Class hero to defeat. The next level is Dragon level, putting multiple cities at risk of destruction. There is no standard for these threats, but we know One-Punch Man can handle them. Finally, a God-level threat endangers all of humanity. It is debatable whether Boros counts as a God-level threat, but given his near defeat of One-Punch Man, we think it’s safe to consider him one.

7) Saitama makes a point of breathing, but he probably doesn’t have to

Let’s revisit Boros’ kick for one moment. When One-Punch Man lands on the moon after being kicked out of Earth’s atmosphere he’s momentarily stunned. Fans have pointed to the fact that Saitama begins to hold his breath as soon as he notices he’s on the moon as proof that breathing is one of the hero’s weaknesses. Here’s the thing: He had already been on the moon long enough at that point to have the air out of him sucked out by the vacuum of space. Saitama thinks he has to breathe, beginning to hold his breath, but the hero is just going through the motions. Even the vacuum of space can’t take him out.

8) One-Punch Man’s workout might not make you the most powerful being on Earth, but it’s actually good for you

While there is obviously more going on in Saitama’s body than his workout regimen, the series makes a point of letting fans know exactly how our hero stays in tip-top shape. His secret? Do 100 push-ups, 100 sit-ups, 100 squats, and 6.2 miles of running every single day, 52 weeks out of the year. The workout is a combination of core training, leg training, and cardio, exercising a wider range of your muscle groups than just running every day. The one downside of this work out is you won’t build a ton of muscle doing it, thanks to the lack of a strength training beyond your normal body weight. On the other hand, that explains why One-Punch Man isn’t absolutely ripped. His work out is designed for lean strength.

9) Saitama is a fan of his creator’s other work

One-Punch Man’s version of Earth might be different than ours, but that doesn’t mean some things aren’t the same. For example, One-Punch Man creator ONE’s other series, Mob Psycho 100, makes a cameo appearance during Saitama’s childhood. Not as a character, but a series the younger version of the hero is a fan of. In One-Punch Man 200 Yen, an extra chapter included in volume one of the manga, we see Saitama as a weak child, losing fights and getting in trouble at school. During one of these scenes, he’s shown wearing a Mob Psycho 1,000,000 shirt. The favor gets returned in Mob Psycho 100, with Saitama appearing in a dream sequence in Mob Psycho 100 chapter 80.5.

10) The first season was done by legendary animation studio Madhouse

A large part of the success of the One-Punch Man anime is its breathtaking animation, which combines multiple different styles of anime into the madcap story we know and love. What fans might not know is the studio behind it, Madhouse, is also behind some of the other most popular and important anime titles of the last two decades, including Perfect Blue, Death Note, Ninja Scroll, and Paprika. Sadly, Madhouse won’t be back for the long-delayed second season. Season 2 will instead be handled by J.C. Staff, with Chikara Sakurai taking the place of season 1’s director Shingo Natsume. J.C. Staff is known for its work on series like Is It Wrong to Try to Pick Up Girls in a Dungeon? and Slayers series, so they do not slouch, but the change may still disappoint some fans.