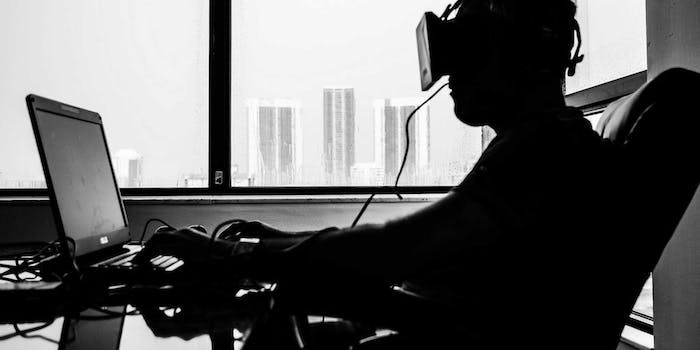 Oculus wants to make the biggest game of all time

“This is going to be an MMO where we want to put a billion people in VR."

Today in “things Facebook and Google will inevitably create that will destroy humanity,” we have the CEO of Oculus, one of the newest members of the Facebook’s burgeoning empire fantasizing about creating a more fun version of the Matrix. Oculus CEO Brendan Iribe wants to use the Oculus Rift VR headset to create a massively multiplayer online (MMO) experience for 1 billion users, a number that is possibly feasible, thanks to new parent company Facebook.

Speaking at the TechCrunch Disrupt conference in New York, Iribe detailed how he wants to mess with human consciousness. “This is going to be an MMO where we want to put a billion people in VR,” Iribe said. When asked why Oculus went with Facebook instead of selling to a gaming company, as the Rift has been consistently shown off as a gaming tool, Iribe said: “Do you want to build a platform that has a billion users on it, or only 10, 20, or 50 million?”

Obviously the creation of a virtual world with 15 percent of the world’s population hooked in would lead to rampant VR addiction, disdain for the real world and physical human contact, an even worse obesity epidemic, new diseases born from sedentariness, and eventually virtual viruses and wars that will leave bodies intact and brains turned into mush. As long as Facebook can deliver those ever-important ads directly into your occipital lobe, all’s well that ends well.