A Daredevil villain is hiding in plain sight in ‘Jessica Jones’

This classic Daredevil villain made an exciting addition to the later episodes of 'Jessica Jones.'

Both shows sourced their supporting casts from the dusty corners of Marvel‘s back catalogue, but Jessica Jones struck gold with NYPD sergeant Will Simpson. Beginning the show as one of Kilgrave’s victims, he later becomes Trish Walker’s love interest before evolving into a fully fledged villain—and possibly also as a teaser for season 2.

At first, Simpson seems like a subtle takedown of hero tropes: a tough guy who wants to protect people (especially women), but winds up acting as Trish and Jessica’s sidekick. But as the show progresses we learn about his dark past, volunteering for medical experiments that turned him into a remorseless killer. At this point, fans of classic Daredevil comics recognized him as a revamped version of Frank “Nuke” Simpson, a Vietnam War-era supersoldier gone rogue.

Nuke’s powers come from a trio of color-coded pills (red, white, and blue), probably inspired by WWII amphetamine programs where soldiers were given stimulants to avoid fatigue during combat. Characterized as jingoistic and hyper-violent, Nuke is functionally addicted to the red pills that give him energy and make him impervious to pain.

Jessica Jones updated this idea to be a little less on-the-nose. In Nuke’s first appearance, a two-issue Daredevil arc in 1986, he has an American flag face tattoo and is obsessed with destroying anyone he perceives as an enemy of the USA. This worked fine in a Frank Miller comic, but is way too intense for a more serious show like Jessica Jones. 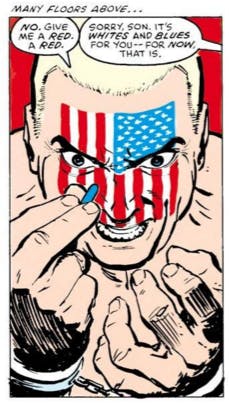 Although he was introduced in a Daredevil comic, Nuke is far better suited as a foil for the original supersoldier Captain America, which is why Steve Rogers appears in the latter half of his first storyline.

Obviously this couldn’t happen in Jessica Jones, but Will Simpson’s arc follows an ongoing theme in the Marvel Cinematic Universe: the perils of trying to build another supersoldier like Captain America. Will Simpson’s pill addiction is just the latest in a long string of failed attempts including the Hulk, the Winter Soldier, and Deathlok in Agents of S.H.I.E.L.D. People are obsessed with gaining superpowers, but those powers always come with a price. 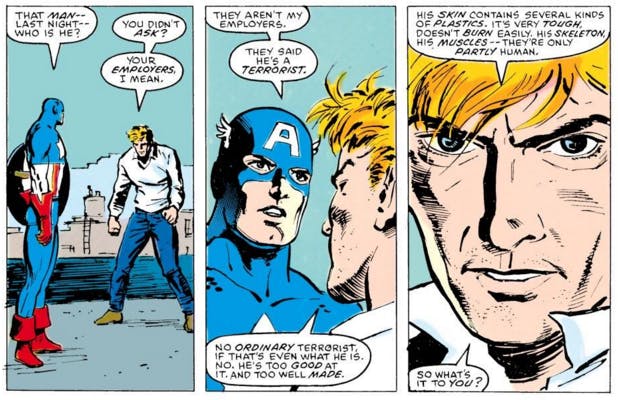 Jessica Jones made Nuke significantly more nuanced than he was in the comics. Instead of just being an embodiment of militarized patriotism gone rogue, Will Simpson ties in to several other themes in the show: addiction, toxic masculinity, and Trish’s not-so-secret desire to be a superhero (which is already a callback to her comics origin as Patsy “Hellcat” Walker.)

In particular, Will Simpson’s violent transformation foreshadows a potential storyline for the show’s second season. Over the last few episodes, Trish begins investigating IGH, the company that supplied Simpson with his drugs. She discovers that Jessica was also listed in IGH’s records, leaving things open for a new storyline about Jessica’s origins.

Nuke doesn’t feel impressive enough to carry a full season like Kilgrave, but we’d be shocked if IGH fails to reappear next season. Also, we’re already wondering if Trish Walker will follow in Nuke’s footsteps by getting hooked on those pills. Despite the disastrous results when she tried the red pills by themselves, she certainly reveled in the strength while it lasted—and the show has already hinted that she had problems with substance abuse in the past.