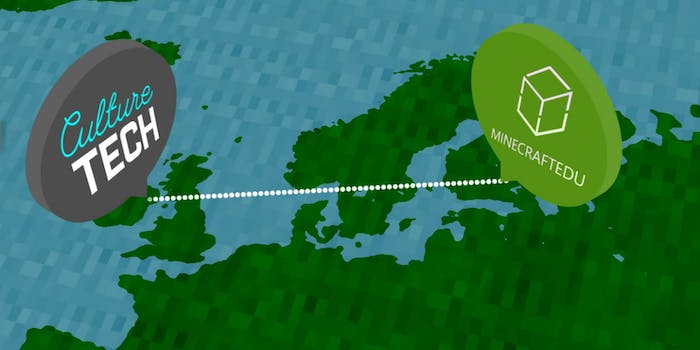 50,000 students in Northern Ireland are getting Minecraft for free

No region has ever offered Minecraft so widely to its school system.

Some very lucky schoolchildren are about to conduct the grandest of experiments to prove whether Minecraft actually is a great educational tool or not.

Ireland’s Department of Culture, Arts, and Leisure is funding an effort by CultureTECH, a festival that celebrates innovation in Ireland, to provide MinecraftEdu to 50,000 secondary school students, and also to libraries and community organizations. MinecraftEdu is a version of Minecraft modded specifically for educational purposes.

Each participating school will receive a personal MinecraftEdu server, 20 licenses of the game, and resources for educators. Creative Learning Centres, which introduces digital learning tools into classrooms in Ireland, and Honeycomb – Creative Works will train teachers who want to be part of the initiative in how to use the software.

The project grew out of an appearance by TeacherGaming, the Finnish company that produces MinecraftEdu, at a CultureTECH event in 2014. TeacherGaming also develops and distributes KerbalEdu, a modded version of Kerbal Space Program used to teach children about physics and engineering.

The Department of Culture, Arts, and Leisure hopes that the problem-solving skills and attention to detail demonstrated by video game players can be brought into the classroom via Minecraft.

In MinecraftEdu, players by default cannot hurt each others’ avatars. The avatars need to eat to stay alive is also turned off by default. The game incorporates “information blocks” that players can strike to trigger help messages that allow teachers to provide structure for lessons taught in Minecraft. Teachers can also freeze student activity in the game and turn their own avatars invisible so they can keep an eye on students participating in Minecraft-based lessons.

CultureTECH says the value of Minecraft can be seen in the successful deployment of the game in art education programs by the Tate family of art galleries in the U.K., and as a tool utilized in Denmark to help children understand democracy.

If you’d like to see more of MinecraftEdu in education, perhaps to nudge an educator to take a look at Minecraft for their own classrooms. The MinecraftTeachr YouTube channel hosts a series of videos on how MinecraftEdu has been successfully deployed, as well further instructions on how to operate the software.

A pilot run of the new MinecraftEdu program was completed by CultureTECH in September 2014. All post-primary schools in Northern Ireland will be contacted by CultureTECH to explain the process by which schools may receive their servers and software licenses.