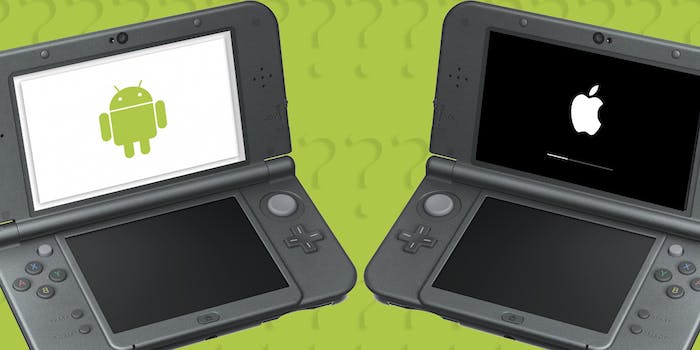 Nintendo is on a quest to capitalize on the mobile game boom.

Software development kits (SDKs) are suites of programs that let developers create software for specific operating systems, whether for computers or mobile devices like tablets and game consoles. If Nintendo is distributing SDKs for the NX system, it means that the company has settled on NX’s basic operating parameters. In the world of game consoles, that means it has some idea of what the hardware will look like.

SDKs require knowledge of hardware configuration for many reasons. It wouldn’t make sense, for example, to give a developer an SDK that supports ten programmable controller buttons if the hardware didn’t include a ten-button controller.

This line from the Wall Street Journal report is an important indicator of the form that the NX console will take.

“People familiar with the development plans said Nintendo would likely include both a console and at least one mobile unit that could either be used in conjunction with the console or taken on the road for separate use.”

That a development kit would include a mobile unit does not necessarily mean that the mobile unit would be Nintendo’s own proprietary hardware. One can easily imagine a scenario in which Nintendo ships the NX console with an iOS or Android device preloaded with special software that links it to the console. This could be a way to make development as smooth as possible for programmers.

But there are reasons to believe that Nintendo may create its own mobile devices for the NX console.

Nintendo is the undisputed king of the mobile gaming market. Its “DS” line of handhelds faces virtually no competition from traditional video-game companies in the handheld realm. The last real attempt came from perennial gaming rival Sony, but its handheld PS Vita unit failed to make a significant dent in Nintendo’s position.

There is also former Nintendo President Satoru Iwata’s oft-cited resistance to his company jumping into the mobile gaming market due to quality-control concerns.

“We make platforms designed to demonstrate the high value of high quality video game software,” Iwata said at a 2011 Game Developers Conference keynote. “But, there is a second, entirely different way to consider the value of software. The objective of smartphones and social networks, and the reason they were created, are not at all like ours.

Producing a proprietary mobile device for the NX console, and limiting mobile NX development to that device, would give Nintendo the level of control that it has always sought.

But investor pressure on Nintendo to jump into mobile gaming focused largely on a desire for Nintendo to release iOS and Android games. Shareholders saw the financial boom in mobile game development on those platforms and hoped that Nintendo would join the existing party.

Nintendo could thus build mobile NX hardware but still allow developers to create NX games for iOS and Android devices, hoping that a game-centric design would attract consumers to Nintendo’s own product. Mobile devices are notoriously incompatible with traditional game designs, chiefly because they lack the analog sticks and buttons upon which those games rely.

These questions could be answered in just a few months. Nintendo will reportedly release its NX console in early 2016, and the 2016 Game Developers Conference in March, or the 2016 Electronic Entertainment Expo (E3) in June, would be prime venues for such an announcement.