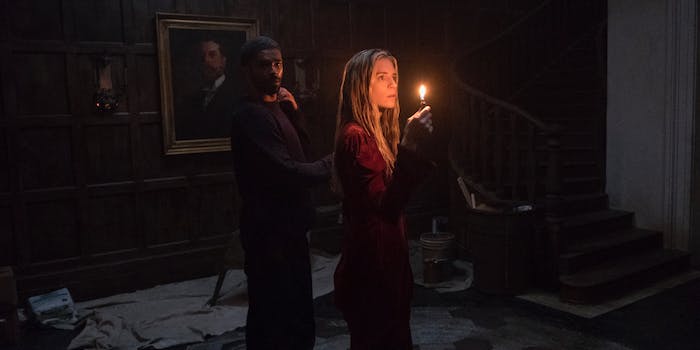 But there's also a conspiracy theory that 'The OA' isn't actually canceled.

TV show cancellations (and the online campaigns to save them) are pretty commonplace these days—especially with Netflix shows that have been canceled after only airing for a season or two. But some fans of one of the streaming service’s recently canceled series have a wild theory about the cancellation itself, as well as a rather unique way to bring attention to their campaign to save it.

The OA, Brit Marling and Bal Batmanglij’s delightfully weird series that encompassed multiple dimensions that characters could travel across by using a series of coordinated “movements,” was canceled by Netflix earlier this week. (Marling also confirmed the news in an Instagram post.)

“We are incredibly proud of the 16 mesmerizing chapters of The OA, and are grateful to Brit and Zal for sharing their audacious vision and for realizing it through their incredible artistry,” Cindy Holland, vice president of original content for Netflix, said in a statement. “We look forward to working with them again in the future, in this and perhaps many other dimensions.”

In the days since, the OA fandom’s push to save the show has ramped up, but some are arguing the long con. A post submitted to r/TheOA (and first highlighted by Insider) mere hours after the show was canceled posited that The OA wasn’t actually canceled but is instead feeding into the meta-narrative of the show.

The OA’s second season ended with Marling’s character, OA, traveling to a dimension where she’s actually Brit Marling and a show called The OA exists. Hap (Jason Isaacs), who’s been a major antagonist in the series, is also in this dimension as Jason Isaacs. According to the theory, a third season would reference the show’s cancellation and have Hap use it as a way to manipulate OA.

It’s compelling, for sure, and if it were to happen, it could certainly shake up what we know about the show. But chances that The OA’s cancellation is actually a marketing stunt set up by the end of its second season are highly unlikely; a source told Insider that “the show is not returning.”

But OA fans are trying to save the show in other ways. They’re using the #SaveTheOA hashtag on social media, and the show’s subreddit is coordinating a “Global Virtual Flashmob” on Aug. 12 at 12pm ET. The subreddit is encouraging its members to post photos or videos of themselves doing the “movements” that the characters in The OA perform for interdimensional travel. (Another poster encouraged those who lived near a Netflix office to perform the movements in-person.)

If you need a visual on how to do the movements, Isaacs helpfully posted a step-by-step video on Instagram last week. He goes all-in on it, too.

A peek behind #TheOA curtain: Homer and Hap stepping it up and sweating like Sumos. Hour three in the studio and this is take 37 of hundreds – interdimensional travel's not for wimps. To the many obsessed and wonderful devotees who approach me all over the world to ask if and when we're carrying on the story: I'm in the same club as you – I think it's utterly brilliant, I'm dying to know what happens next and I'm waiting for the phone to ring. Don't ask me #AskNetflix! @britmarling @z_al @the_oa #EmoryCohen @netflix #LordsOfTheDance #MagicMikeNine – They're Back, They've Let Themselves Go A Bit, And They're Dressed For Yoga.

Although Netflix garnered a reputation for saving shows from cancellation hell, revivals of shows that originate on Netflix are much rarer. After loud fan protest, Netflix gave Sense8—another show canceled after only two seasons—a movie to wrap everything up. And One Day at a Time, which was already a revival of the classic Norman Lear series, was picked up by the cable channel Pop TV several months after it was canceled—and reportedly after Netflix refused an offer from CBS All Access to save it.