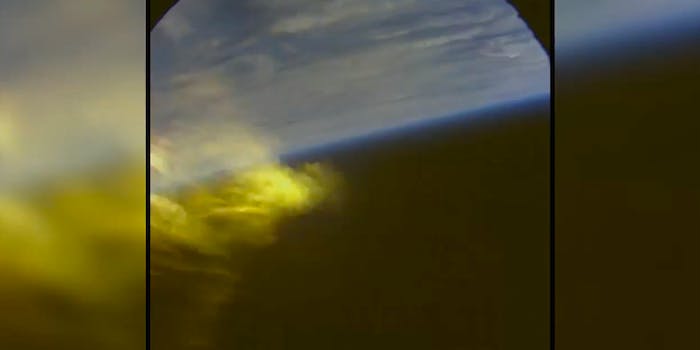 You'll feel like an astronaut after seeing the view from the spacecraft.

NASA’s Orion flight test on Dec. 5 brought us one step closer to sending astronauts to Mars. While many of us are marveling at what the success of this mission means for the human race, a new video released by NASA is giving us a taste of what returning to Earth from such a trip would be like in the space capsule.

The below video shows the view looking outside the windows of the Orion crew module 10 minutes before it splashed down in the Pacific Ocean. According to NASA, it shows “the intense conditions the spacecraft and the astronauts it carries will endure when they return from deep space destinations on the journey to Mars.” The video starts just as Orion begins to experience the atmosphere. NASA goes on to explain what we’re seeing in the rest of the footage:

“Peak heating from the friction caused by the atmosphere rubbing against Orion’s heat shield comes less than two minutes later, and the footage shows the plasma created by the interaction change from white to yellow to lavender to magenta as the temperature increases. As Orion emerges safely on the other side of its trial by fire, the camera continues to record the deployment of the series of parachutes that slowed it to a safe 20 mph for landing and the final splash as Orion touched down on Earth.”

The plasma colors are especially beautiful, and it’s amazing how thrilling it is to see the parachutes deploy as Orion reaches its destination. Maybe it’s how much the view makes us feel like we’re astronauts ourselves or the thought that one day people will actually be returning in a similar manner from their missions. Either way, it’s a must-see video that is sure to get you psyched for the future.