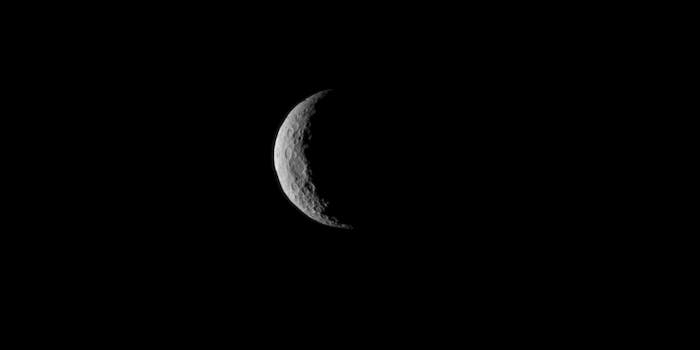 At last, Dawn has come to Ceres.

It’s a good day to be in the space fandom. After an eight-year-long, 3-billion-mile voyage, NASA‘s Dawn space probe has finally arrived at its destination: the orbit of Ceres, a small dwarf planet located in the asteroid belt that lies between Mars and Jupiter.

Went into orbit at #Ceres at 4:39 a.m. PST today. Read all about it: http://t.co/7nKx3UmY2t Recent image: pic.twitter.com/xTogoLgfoN

Principal investigator for the Dawn mission, Chris Russell, said the team of researchers felt “exhilarated” at the achievement.

Anticipation for the probe’s arrival at the planet has been high this week, with NASA releasing tantalizing photos of the planet looming ever closer and closer.

A chief area of interest for Ceres watchers has been two mysterious pinpricks of light that seem to be emanating from a crater on the mini-planet’s surface. Ceres will hopefully gather data that can identify the source of the light, as well as the makeup of the planet, which scientists believe to be chiefly comprised of rock, ice, and perhaps even underground oceans.

In orbit & curious about the bright spots too! Will find out more as I get closer to #Ceres http://t.co/7nKx3UmY2t pic.twitter.com/Xd6tickLBL

It’s been a good reign for dwarf planetary exploration. Dawn previously orbited Vesta, another dwarf planet in the asteroid belt between Mars and Jupiter. While it will take a few months more to reach its destination, NASA’s probe New Horizons is already transmitting intriguing photos from its long-haul trip to everyone’s favorite dwarf, Pluto.

Astronomy buffs can look forward to that milestone occurring in July. In the meanwhile, by mid-April, Dawn should be out of Ceres’ partially shadowed hemisphere and hopefully collecting beautiful, sunlit images of the planet’s surface.