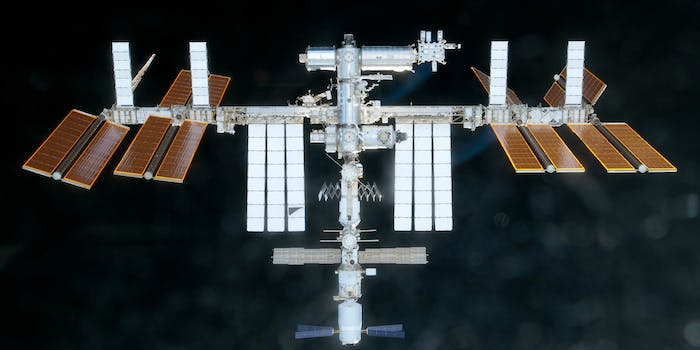 NASA astronauts will get to watch ‘Star Wars: Last Jedi’ in space

These space travelers have the best seats in the universe!

While us regular folk make our way to local theaters to watch Star Wars: The Last Jedi this week, astronauts aboard the ISS (International Space Station) will get to enjoy the movie in orbit a few hundred miles above the surface of the Earth.

Robin Seemangal, a spaceflight reporter, broke the news earlier today on Twitter, leaving us all to envy the Star Wars movie watching experience of a lifetime.

“I received confirmation from Disney and NASA sources that the crew aboard the International Space Station will be screening Star Wars: The Last Jedi,” he wrote.

“[I] can confirm the crew will be able to watch it on orbit,” NASA Public Affairs Officer Dan Huot told Inverse. “Don’t have a definitive timeline yet. They typically get movies as digital files and can play them back on a laptop or a standard projector that is currently aboard.”

Though this may be the most appropriately themed movie for astronauts to watch while coasting through the cosmos, it will not be the first time a movie is enjoyed aboard a spaceship. The space station actually has an entire digital library of more than 500 movies, including sci-fi favorites like Aliens and 2001: A Space Odyssey. During free time, astronauts typically kick back and watch films. Astronaut Scott Kelly shared in a 2015 Twitter post with a picture of the ISS’s movie night:

#Movie night in micro #Gravity aboard #ISS on our new HD projector which we use for conferences, tech software, etc.. pic.twitter.com/Mhb03U3alz

With no gravity out there, we wonder if astronauts fly around and catch floating popcorn in their mouths during the movies?