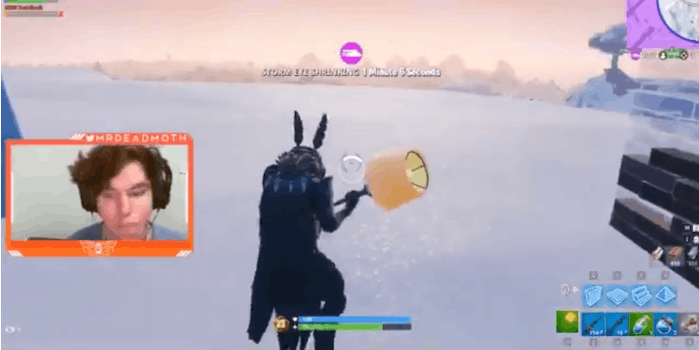 Twitch is being criticized for not permanently banning him.

A Twitch streamer who made headlines in early December after reportedly assaulting his wife during a livestream has been allowed back on the platform.

The Australian streamer, MrDeadMoth, was charged with assault on Dec. 9, according to Sydney newspaper the West. In the immediate aftermath of the incident, the Twitch and Twitter accounts of MrDeadMoth—whose real name is Luke Munday—were suspended. On Dec. 30, however, the 26-year-old was back to streaming on Twitch, according to Dexerto.

In a series of videos uploaded to Twitter and YouTube by viewers and fellow streamers, the altercation between Munday and his wife can be witnessed. The videos show an increasingly irate Munday attempting to continue his game of Fortnite during a domestic dispute, which ends with him exiting the viewable screen and screams from his wife. Two children, one 3 years old and one 20 months old, were also reportedly in the home. Witnesses on Twitch began reaching out to authorities.

Munday appeared in court on Dec. 13, according to News.com.au, where his case was adjourned until Jan. 10. The article cites court documents which reveal that Munday “has been charged on two previous occasions in 2011 for malicious damage and common assault, both of which were not domestic related.”

The document also cited the prosecution’s strong case, due to the “numerous independent witnesses to the offence as a portion of the incident was livestreamed.”

The news that Munday is back on Twitch was met with anger from the gaming community. Twitter users immediately slammed the platform for not permanently banning him.

Viewers on Twitch who brought up the early December incident were reportedly “banned or timed out from chatting,” according to Dexerto.

Hey @Twitch @Twitch_ANZ how is the absolute spineless worm MrDeadMoth able to stream on your platform again after bashing his wife/fiance on stream. Pretty disgusting that hes even allowed an account after that despicable act.

Which begs the question: how the fuck do you get permanently banned on Twitch if beating your wife during a livestream doesn't do it?

“MrDeadMoth, the streamer who hit his wife in a horrifying altercation that was captured live, was unbanned on Twitch and streamed again,” Twitter user @Slasher wrote. “Totally unacceptable from Twitch. Banning other streamers for much less and this guy gets back on?!”

MrDeadMoth, the streamer who hit his wife in a horrifying altercation that was captured live, was unbanned on Twitch and streamed again!

Totally unacceptable from Twitch. Banning other streamers for much less and this guy gets back on?! I was provided this SS from his return. pic.twitter.com/H081sP3uQ6

What I most don't understand about the MrDeadMoth situation is that he is ONLY an affiliate, non partners rarely (if ever) recieve support and in most cases are permabanned. WHY in HELLS NAME did Twitch think "Oh yeah this guy! Let's help this one!" ??? https://t.co/Ez7bfPokc0

Other than accounts that appear to be purely trolling, there is no real support for Munday online. Munday did not respond to a request for comment.

Why has MrDeadMoth been allowed to resume streaming, when so many people have been permanently banned for lesser offenses? We’ve reached out to Twitch.

If you or someone you know is experiencing intimate partner violence, contact the National Domestic Violence Hotline at 1-800-799-7233, or https://www.thehotline.org/