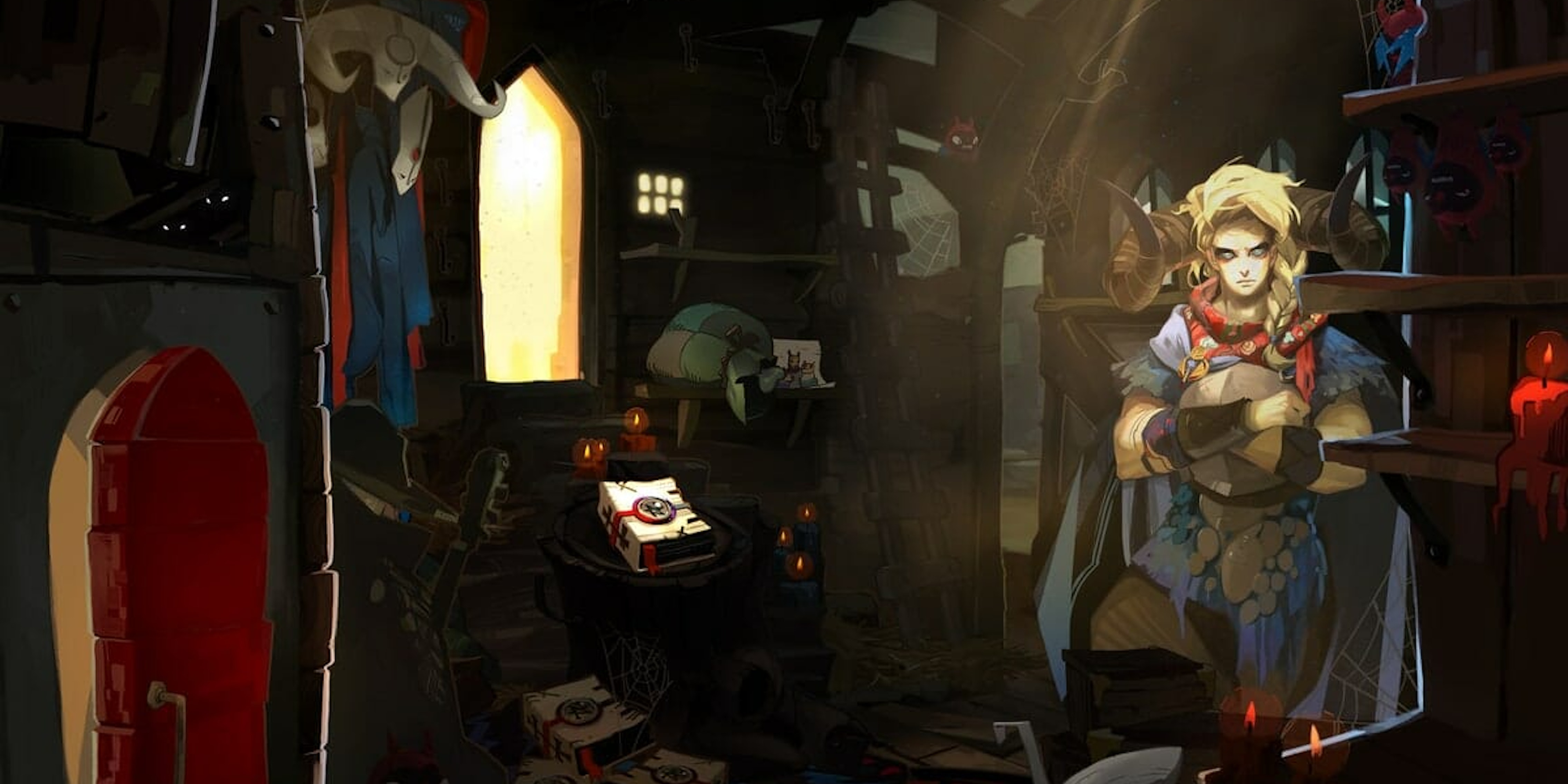 These titles are still worth catching up with.

Despite nearly everything else happening this year, 2017 proved to be one of the best years for video games—ever. With the continued strength of third-party titles, a glut of PS4 exclusives, the strongest Xbox console yet, Nintendo’s triumphant return, as well as new breakthroughs in indie titles, there was no shortage of excellent new releases this year. But while there was certainly something for everyone, no one person could play everything.

With games like Legend of Zelda: Breath of the Wild, PlayerUnknown’s BattleGrounds, and Destiny 2 dominating mainstream attention, it was easy to miss out on some games. (Though even niche titles like Persona 5 and NieR Automata have received a fair share of accolades). If you’ve played this year’s biggest games, but still want more, consider one of these titles.

This story follows two of Yakuza’s biggest names, Kazuma Kiryu and Goro Majima, at the beginning of their lives in the criminal underworld. Controlling two protagonists makes for moment-to-moment gameplay that never gets boring, and it allows for some wild turns in the plot. The best moments involve local karaoke bars, businessmen, and colorful cars, in one-off segments that absolutely deserve your attention.

It’s a fighting game about making friends. That’s how Absolver bills itself, and it manages to deliver. For those who find the genre too mechanically dense to break into, everything is explained succinctly in a breezy tutorial area. But for hardcore players, the layers of depth in Absolver’s combat system are immediately impressive. You travel around mastering individual moves, advancing your unique fighting style. By meeting other players and sparring with them, you learn new techniques to add to your repertoire.

An emphasis on martial arts mastery changes Absolver’s core experience drastically as both a traditional fighter and open-world adventure. You’ll need to closely monitor your stamina, think carefully about inputs, and reflect on what you learn from each combat encounter. Absolver could be seen as an introduction to fighting games, but it functions more like a lesson on how to play online. Other players aren’t seen just as targets, but rather collaborators. Meditative, calming, and surprising, this is the rare game that manages to be entertaining and educational.

There’s more Earthbound in Golf Story than there is PGA Tour, but the spin on golfing gameplay is realized as relaxing (but still challenging) puzzles. You wander around a quaint town with aspirations of becoming a professional golfer, challenging yourself with an escalating series of courses and one-off encounters. Each character you run into brings a new wrinkle of humor and personality to this story, which should run you about 20 hours, at home or on the go.

Supergiant Games somehow managed to follow up its iconic indie masterpieces Bastion and Transistor with its best game yet. Everything about Pyre is a pleasant surprise, and the experience slowly evolves into something absolutely unexpected. From the opening moments, a compelling, interesting world is built out and explored through the eyes of a band of outcast characters. While much of the action plays out like a visual novel, navigating through dialogue options and interacting with hidden objects, there is an active, exciting element in the form of a 3-on-3 sporting event.

Every member of your team brings something special to interpersonal interactions and on the battlefield. You feel attached to every individual, even when they oppose each other. Choosing who to bring to a match, or who to side with in a conflict, sets the stage for the game’s final act, which is full of difficult decisions. Coupled with a gorgeous soundtrack and emotive art, Pyre crafts a memorable, heartbreaking experience that will completely envelop you within its universe.

“Rouge-like” and “Metroidvania” are two of the most common descriptors when it comes to indie games. It’s easy to know what to expect from games like this: randomly generated, changing rooms and a steep difficulty curve to encourage multiple run-throughs. There are dozens of 2D platformers in this vein available to download right now, but Dead Cells does something different.

Set in a foreboding castle full of dangerous creatures, the side-scrolling madness never stops presenting you with new ways to experiment and explore. You can carry an impressive amount of weapons, swapping and switching between swords, whips, and bombs on the fly. Enemy encounters require quick reflexes, with more emphasis on rolling and parrying than using brute force. There are challenging elements introduced later into the adventure, fundamentally changing the way certain sections play out. In an already overcrowded genre, Dead Cells stands on its own and never feels derivative. 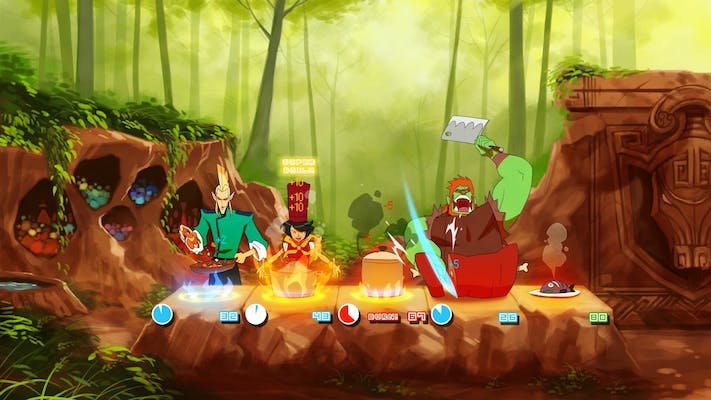 If RPGs coupled with unexpected genres was a trend in 2017, one of the latest additions was also one of the best. As you might expect, Battle Chef Brigade combines the stressful crunch of cooking with a light-hearted spin on JRPG tropes. It also borrows a lot from shonen anime, making for a silly story that gives the player time to focus on the surprisingly robust techniques you’ll need to master in the kitchen.

Trinket Studios has crafted a gorgeous kingdom, full of friendly faces and fearsome foes fully realized in a hand-drawn aesthetic. Dealing with puzzles, monsters, and other chefs through a simple, color-based combat system is easy to grasp at first, but quickly becomes more involved than a traditional cooking game. Balancing ingredients, resources, and time proves to be a real undertaking, leading to a great sense of accomplishment within every encounter. 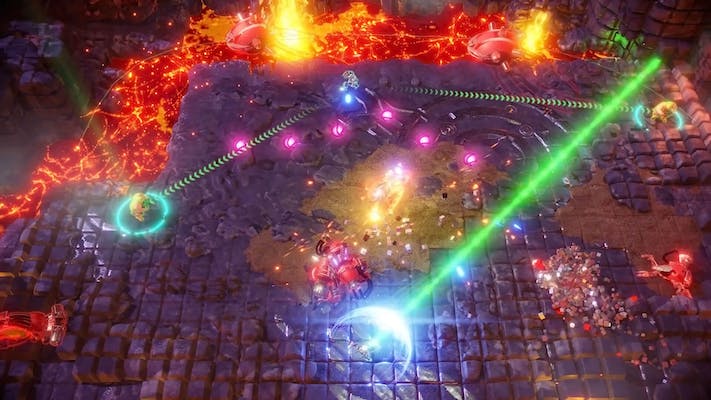 Housemarque is nearly synonymous with the shoot-em-up genre at this point, providing a string of satisfying titles that scratch a very specific itch. Games like Alien Nation and Resogun are packed with waves of enemies, power-ups, and colorful explosions. If this fast-paced, reflex-heavy action is your speed, Nex Machina brings everything you’ve come to expect and more.

In a world where humans have grown too reliant on technology, computers have managed to achieve consciousness. You control a survivor set on resisting the robot uprising, and equally set on blowing up everything in sight. From a top-down perspective, you blast through hordes of machines using a wide variety of weapons and skills. After seeing the story through to the end, you can challenge yourself and other players by going for high scores and climbing up the global leaderboards.

Each new area feels different from the last and offers plenty of new challenges. A bold, hand-drawn art style lends distinct feelings of dread, elation, and suspense when necessary. Enemies come in all shapes and sizes, with vivid designs. Massive bugs and beasts dwell beneath the surface, all waiting for you to find them. Borrowing from the Metroidvania genre, Hollow Knight gives players reason to replay it, with multiple endings and a treasure trove of secrets tucked away.