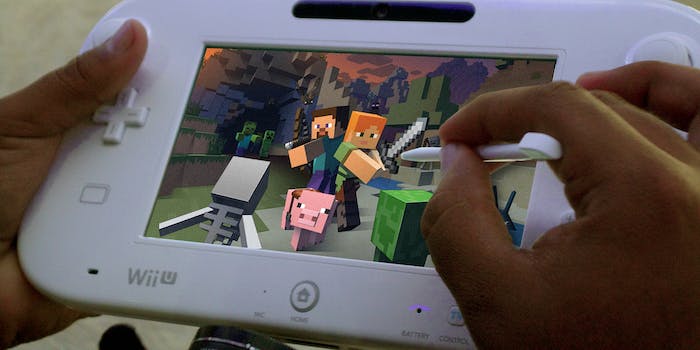 Minecraft is finally coming to the Wii U

The Minecraft phenomena is one step closer to conquering the universe.

Nintendo announced today that Minecraft Wii U Edition will be released on Dec. 17 for $30. A release on the Wii U means that Minecraft is now basically everywhere that you’ll find video games: PC, PlayStation, Xbox, iOS, and Android. You can even play the game on Kindle Fire.

The Wii U edition of Minecraft will be playable on the Wii U’s GamePad, which will come in handy in case you need to kick a player off the television without interrupting the construction of ultra-realistic cities or giant arcade machines or plans for real-life national parks.

Six content packs will be included for free with the Wii U version of the game, with 16 other expansion packs available for download on the Nintendo eShop, including skin packs for The Simpsons, Star Wars, Doctor Who, Mass Effect, and Skyrim.

Photo via wiiu-spiele/Flickr (CC BY SA 2.0) | Remix by Jason Reed