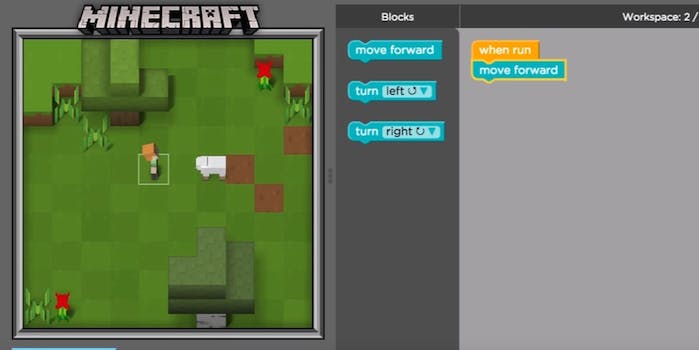 Learning to code is fun and easy with this Minecraft tutorial

Learn how programming works and explore the world of Minecraft, all at the same time.

Code.org, the non-profit organization that teaches beginners the basics of coding and programming languages, has gotten savvy about bringing popular fandoms like Frozen to its “Hour of Code” program. Now the group has turned to Minecraft, working with lead developers to bring core coding concepts to the game’s millions of fans.

Hour of Code tutorials are designed to walk you through the concepts behind computer code, allowing both kids and adults to accomplish simple programming commands. Instead of just telling you how the code works, though, the tutorial immediately shows you what the commands do.

In Minecraft’s case, that means watching your character perform increasingly elaborate operations at your command. Here’s the first task, the very simple “run to cow,” in action.

This operation is the result of three simple Javascript commands.

Sure, it doesn’t look like much, but using these basic concepts, you’ll soon be shearing sheep, knocking down trees, and building houses.

OK, so you probably won’t be turning heads in Silicon Valley any time soon with your newly acquired house-building skills, but this is a great way to learn more about code and introduce learners of all ages to the concepts that lead to great coding languages.

Plus, getting to play Minecraft for an hour in the name of education sounds pretty good to us.