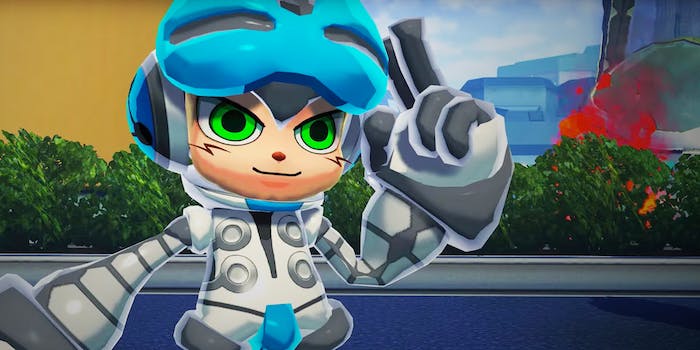 After years of delays, Mighty No. 9 to be released in June

If Mighty No. 9 somehow finds itself delayed again, it’s not going to be because the game isn’t finished.

Keiji Inafune, the developer famous for his work on the beloved Mega Man series, announced on the game’s blog that Mighty No. 9, the Kickstarted spiritual successor to the original Mega Man, has finally gone gold and will be released on June 21 in North America and Asia, with a worldwide release on June 24.

When a video game “goes gold,” that means the master copy of the game—the copy from which all other copies will be made as the game goes into mass production prior to distribution—is finished and is ready for the public, with perhaps a patch for lingering issues.

“Therefore the release date we are announcing is set in stone and there will be no further delays for the game,” wrote Infaune on the Mighty No. 9 blog.

The Kickstarter for Mighty No. 9 was launched in August 2013, with an anticipated release date of spring 2015. On April 28, 2015, the first delay was announced, owing to a publishing deal that would allow Inafune and his team to add additional localization options. On Aug. 5, the second delay was announced, because of the need for bug fixes.

On Sept. 25, a release date of Feb. 9, 2016 was announced on the Mighty No. 9 Kickstarter page but the third delay, due to issues with the game’s matchmaking mode, was announced two weeks prior to release.

Now, hopefully, the roller coaster of delay announcements is truly over, and Mega Man fans can get excited for the release of Mighty No. 9, the next, best thing to a new Mega Man game from the developers that birthed the series.