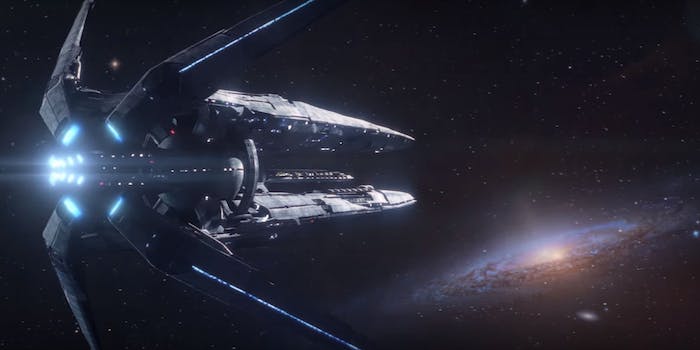 There are a couple of intriguing clues hiding in this new 'Mass Effect' trailer.

The first trailer for Mass Effect: Andromeda doesn’t include any gameplay footage, serving instead as a fond farewell to the earlier Mass Effect games.

BioWare posted the trailer as part of the celebrations for N7 Day on Saturday, commemorating the anniversary of the first Mass Effect. It mostly consists archival footage with a voiceover from Commander Shepard, which came as a disappointment to fans who were hoping for a real taste of the upcoming Mass Effect: Andromeda game.

However, there’s still a subtle clue lurking in the shadows of this trailer: A pair of dog tags are visible inside the spaceship’s cockpit, around 45 seconds into the video.

The dogtags read “RYDER,” which fans are already speculating is the name of Andromeda‘s main character. On the opposite side of the console, you can also see a family photo of an adult and children, their faces in shadow. Could this be a hint of what to expect now that Mass Effect has left Commander Shepard behind?