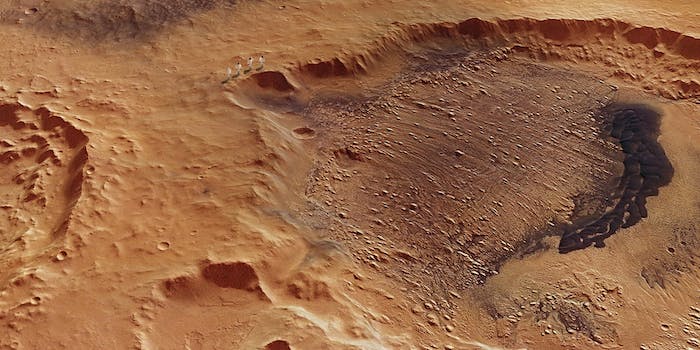 It's getting real for Sonia Van Meter.

The thought of embarking on a one-way trip to Mars is downright romantic at this point. At least relative to the Hunger Games–like scenario staring down Alexandria, Va., political consultant Sonia Van Meter. Leaving her husband and stepchildren behind on Earth to join the Mars One mission is a family-endorsed, greater-good effort that she’s valiantly explained time and again (most recently, by way of an essay in Time).

On the phone Van Meter is serenely level-headed. Seraphic, quarterly transmissions from Mars to humanity aren’t difficult to fathom for her. The bummer is first enduring a stint as a reality television star.

Van Meter was one of 200,000 applicants to join the hypothetical, Dutch-funded mission to the Red Planet. She made the final 1,000 last year. Local news did a thing to fill space. This month, Van Meter made the final pool of 100—all of whom are tentatively penciled in for an internationally televised competition to whittle it down to 24. Van Meter is “completely and utterly overwhelmed” at the moment, coordinating CNN, MSNBC, and radio interviews personally between work emails.

“[When you’re] one of 100 you know things start to get real,” Van Meter says. “I mean it’s terribly exciting and thrilling and wonderful and humbling.”

Once the competition is down to the final 24, the men and women will be bundled like elementary school reading groups into six teams of four. Starting in 2024, one crew will take the express to Mars every two years.

Van Meter says with the science-fiction–like pageantry of the finalist announcement, it was as if her name had been “drawn out of a magical hat.” And now she’s in the process of explaining herself and warming up to the general public in the hopes we’ll text our inevitable reality TV votes (or whatever) in her direction.

“I think it’ll be an interesting couple of years just seeing how all this plays out,” Van Meter says. “There is a sort of element of Survivor to it, but I feel very confident that the best team will be picked.”

The ancient Aztecs played an early, brute-force-driven game of basketball. Archaeologists in places like Teotihuacán, Mexico, say that the winners enjoyed the good fortune of ascending to be with the gods. What that meant, of course, is that they became human sacrifices. It’s entirely likely that—should a manned and privately funded flight get to Mars—its inhabitants will perish like test pigs after two months. Van Meter is not shaken by the swirling variables.

“I think that we are on page one of a very, very long story. Obviously this is the single greatest endeavor that humanity has ever attempted. There are a million things that have to happen in the right order, and there are a billion things that can and probably will go wrong along the way. Maybe it happens, maybe it goes off in a ditch. Maybe it gets delayed a little while it finds funding,” Van Meter says. “No matter what happens, this organization is advancing the dialogue about humanity going out in space, and that is what is at the heart of this for me.”

If that sounds like an idealist route to take, it’s probably because Van Meter was raised on and remains inspired by the prevailing philosophies of Star Trek. Go boldly into that unknown in the name of advancing mankind, basically. Van Meter calls Star Trek a “magnificent story about humanity overcoming obstacles working together moving past boundaries.”

“I fully credit [Star Trek creator] Gene Roddenberry with me wanting to go to Mars,” she says. “We live in a universe and we’re just beginning to scratch the surface… For me this is just about forcing humanity to go ahead and look up to the moon and say, ‘Hey, once upon a time we went up there. We started with the moon, and now it’s time to go further.’”

Van Meter maintains that Mars is a worthy landing spot for humans, one that could provide thunderous responses to questions of the universe.

“There’s a lot of evidence that suggests that Earth’s and Mars’ histories are very closely tied together,” she says.

But in the meantime, Van Meter is sharpening her imminent world press tour. That includes sexist criticism about the central fact that she is a (step) mother leaving behind two kids forever. She’s a woman with kids, and so she’ll face the “bad mother” doubters soon enough.

“There’s been a lot of conversations about that… but I don’t know that I can in good conscience call that an unfair criticism. At the end of the day, we are still talking about a woman who is voluntarily offering to leave her family behind. Those are the facts and they are undisputed and I can understand that for a lot of people, that’s an intolerable idea,” Van Meter says. “To them I would also say that my family is the reason that I am doing this and not just my family but their family and every other family on this planet. There are some things that are greater than a single life and even a pair of lives and my husband and I have talked this about at great length. I’ve talked about this with my stepchildren. And we as a family believe that there are certain risks and certain acceptable losses that should be dealt with to advance this kind of mission.”

Well then—to infinity and the great beyond.