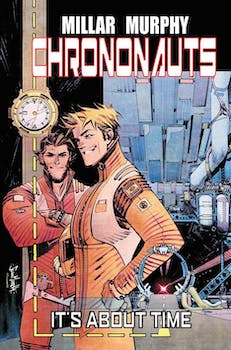 Do you see a broken watch or a green hourglass?

Mark Millar—who you may know as the writer of Kick-Ass, Kingsman: The Secret Service, and Starlight—has a new comic coming out Wednesday.

The new Image Comics series Chrononauts follows two science geniuses on a time-traveling adventure, perhaps making it fitting that the cover of the first issue features an optical illusion that will be easy for most readers to miss.

The optical illusion can be found in the watch featured on the left side of the cover. While the majority of people will just see a broken watch, apparently some may see a green hourglass on a purple background.

Before Chrononauts illusion explained by @Sean_G_Murphy, what do you see in the middle of time-piece on left? pic.twitter.com/dYrkT8ccjV

The creators explained the illusion on Twitter. According to Millar, Murphy made the illusion with the help of a neurologist and there’s no way to see anything in between the two.

Yes, most people see the broken watch-face with no hands. 1 in 15 see a diff picture entirely. Super-creative brain sees it differently.

It's a semi-rare sporadic form of color-blindness due to abnormal wiring in occipital lobe… @mrmarkmillar pic.twitter.com/lvR2LEoOLK

The illusion may not have gone quite as viral as that infamous dress, but it has still managed to cause some debate online. A few have said they can see the hourglass, including actor Nick Frost, while the majority just see the watch face. Others don’t think there’s an hourglass there to see at all.

Green hourglass!!! (Ish) do I win a prize?!! I hope it's an optical illusion or I'm having a little stroke.

@mrmarkmillar @Sean_G_Murphy all I can see is a broken clock face with no hands. This is like those magic eye pictures.I could never work em

No matter what you see in the watch face or think of the illusion, there’s no doubt it has succeeded in drawing attention to Millar and Murphy’s new series hitting shelves March 18.