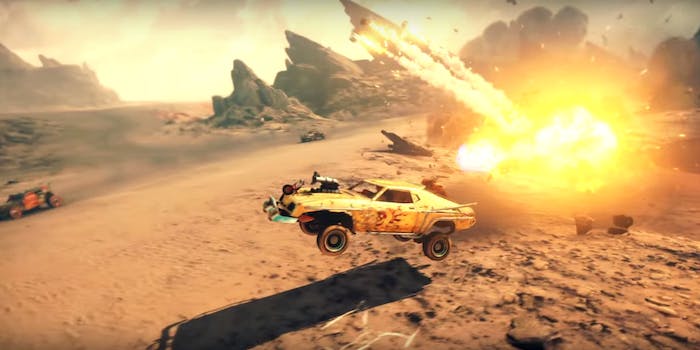 You're going to wreak havoc in the post-apocalyptic world. The only question is how you do it.

Stuff is going to explode, spewing rusted, metal debris across the sandy dunes, no matter what path you choose in the new Mad Max game.

The upcoming open-world game from Avalanche Studios, creators of the Just Cause franchise, takes place in a Fury Road-type vision of George Miller’s classic Mad Max films. You play as Max while he takes down convoys and outposts spread across the desert landscape—and like in the Just Cause series, what matters most is how you choose to wreak havoc upon your enemies.

How you choose to make your presence known to the tribes and raiders that prey upon everyone in the blasted, desert world of Mad Max will always lead to the same end, and a new interactive trailer for the game makes that point nicely.

Each “chapter” of the trailer gives you three options for accomplishing a goal. You’ll blow up a lot of cars whether you “go heavy,” which means playing demolition derby; “go loud,” which means letting a passenger enjoy firing a rocket launcher from the back of your car; or “go mad,” which means shooting cars with grappling hooks, and with explosive rounds from the driver’s-side window.

The big question is whether or not the new Mad Max game can capture the things that made Mad Max: Fury Road such a brilliant film—a thoughtful story that retains all the action and appeal of a Mad Max movie without wasting a frame. Video games don’t have “frames,” per se, but they do have pace, and a game’s pace can either be tightly constructed or devastatingly bloated.

You can find out for yourself whether the new Mad Max game truly follows up on the promise of Fury Road when the game is released on Sept. 1. for PC, PlayStation 4, and Xbox One.