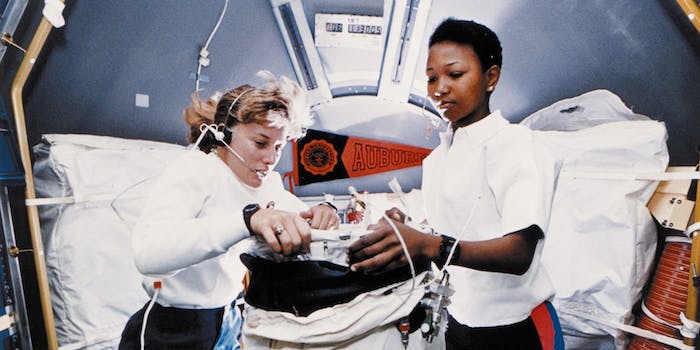 ‘The Next MacGyver’ searches for a new engineering heroine

The world needs a female MacGyver. This contest will pay you $5,000 to pitch a TV show about one.

The classic 1990s adventure show MacGyver inspired countless people to begin careers in science and engineering. Now, a new contest is hoping to create an equivalent show for the 21st century.

The Next MacGyver is seeking someone who can write a TV show with a female-engineer protagonist. It is supported by the National Academy of Engineering and the creator of MacGyver. The plan is to tackle two birds with one stone, improving female representation on TV while inspiring more women to go into engineering.

The top five applicants will receive $5,000 each to write their scripts. They’ll be mentored by established TV writers and producers like Roberto Orci (Star Trek Into Darkness, Sleepy Hollow) and Lori McCreary (Madam Secretary).

The deadline is May 1, but you don’t have to have a full script ready by then. The requirements are surprisingly simple: A title and summary of your idea for a show, plus a pilot episode outline and one-line pitches for later episodes. You need to make sure your idea either focuses on an engineer or includes engineering as a core element of the show. Writers have free rein in terms of genre.

The contest’s YouTube channel has already made it clear that the goal isn’t to produce a MacGyver reboot. The project’s creators want something brand new with a similarly entertaining and inspirational tone.

In other words: no ripoffs of Batman or Star Trek characters, please.

If you’re interested in submitting to the project, start with Wikipedia. While it isn’t always the most academically reliable of resources, pages like History of women in engineering and Women in engineering could set you on the right path, helping you create an awesome female-engineer protagonist.