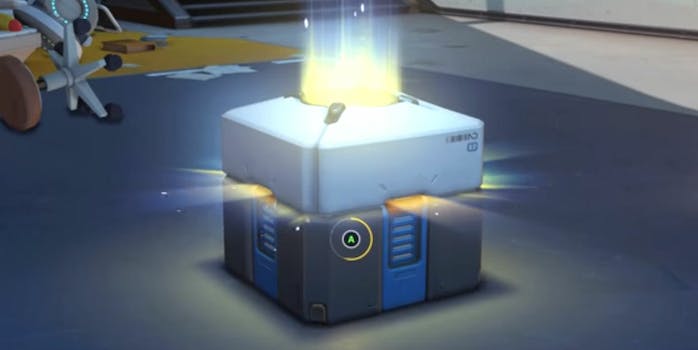 'It is often children who come into contact with such systems and we cannot allow that.'

Back in April, the Belgian government declared that loot boxes in video games are an illegal form of gambling, instructing major game developers like Blizzard, 2K, EA, and Valve to remove the function from their games or suffer fines and even possible jail time. That decree has finally come to fruition, as Blizzard and 2K announced they have formally expunged loot boxes from the Belgian versions of their games.

In a post on the official Blizzard forums, the company announced that players will no longer be able to spend real-world money on loot boxes in Overwatch or Heroes of the Storm.

“While we at Blizzard were surprised by this conclusion and do not share the same opinion, we have decided to comply with their interpretation of Belgian law,” Blizzard wrote. “As a result, we have no choice but to implement measures that will prevent Overwatch and Heroes of the Storm players located in Belgium from purchasing in-game loot boxes and loot chests with real money and gems.”

Blizzard says that players will still be able to earn loot boxes by playing more matches and earning experience points, allowing them to earn one loot box for every level gained. Looks like a lot of Belgian Overwatch players are about to earn their fourth prestige star.

Blizzard says the changes will be implemented “shortly.”

NBA 2K developer 2K Games has also acquiesced to the Belgian government’s position. According to a report by Eurogamer, 2K Games has removed the option to buy MyTeam packs for real-world money but is still allowing players to grind enough in-game currency to purchase them that way. MyTeam packs allow players to earn cards that unlock different players for their ultimate dream team.

“While we disagree with this position, we are working to comply with Kansspelautoriteit’s current interpretation of these laws,” 2K wrote in a statement. “We will be continuing conversations with the Kansspelautoriteit in order to explain our view on how NBA 2K and the Auction House already comply with local laws. If you agree, we recommend that you contact your local government representative to communicate your opinion.”

Both Blizzard and 2K suggesting they’ll push back against these restrictions (and use their customer bases to do so) indicates that this isn’t the last we’ve heard of the issue.

It’s unclear how these changes will impact NBA 2K19, which releases Sept. 11.

Back in April, one big factor the Belgian government seemingly considered was the impact such mechanics would have on younger players.

“It is often children who come into contact with such systems and we cannot allow that,” Minister of Justice Koen Geens said in April.