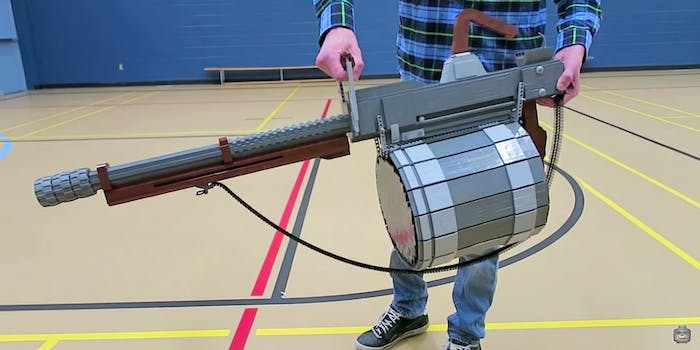 Chalk up another fantastic build for a prolific Lego prop artist.

If you can dream it, one popular Lego channel on YouTube can probably build it.

In fact, “Making your dreams come true” is part of the tagline for the ZaziNombies LEGO Creations YouTube channel. The latest build featured on the channel is the Tomislav heavy machine gun from Team Fortress 2. The 42 1/2-inch long build combines around 2,500 standard Lego bricks with pins and rings from the Technic line of Lego kits and weighs about 10 pounds.

The Tomislav is just one of a ton of Lego builds on ZaziNombies’s YouTube channel. Some favorites of ours are the MIDA Multi-Tool scout rifle from Destiny:

Here’s a chest from Minecraft, complete with a diamond and a gold bar:

And here’s the Phantom Blade from Assassin’s Creed Unity:

If you want to suggest something for ZaziNombies to build, you can message him on Twitter and via his Facebook page.