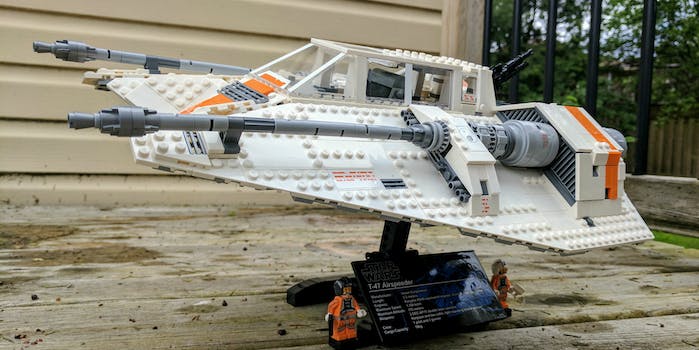 This Lego Snowspeeder is a thing of beauty.

That’s the feeling I’m left with having completed building the new UCS Snowspeeder. At 1,703 pieces, it absolutely dwarfs all the previous Snowspeeders Lego has put out over the years. It’s a wondrous thing of beauty that would look great in any collection.

For my part, I can’t wait to replace all the other puny-in-comparison Star Wars Lego vehicles I have with their bigger and better UCS versions, wherever possible. The new Snowspeeder, which sells for $199, is amazingly detailed, with all the moving parts you’d expect. The cockpit opens and closes and surprisingly manages to hold its own weight when up. The rear blaster/harpoon gun swivels and, in a nice touch, also syncs with the rear-facing cockpit controls. Turn the blaster, and the monitor moves with it.

The coolest moving parts are the brake flaps, which are linked through an intricate set of elements to the rear engine exhausts. Twisting those exhausts left or right raises and lowers the flaps.

The Snowspeeder is a fun build for expert Lego aficionados, without much of the repetition found in some sets. The process, which took me about five hours, essentially breaks down into four sections—the display stand, the central fuselage, the wings and the cockpit—and contains a few head-scratchers that actually turn out to be very smart design decisions.

I thought I had made a big mistake with the stand, for example, when I put the Snowspeeder on it and the whole thing flopped forward, nearly crashing to the table. It took a while to figure out that the vehicle isn’t necessarily intended to sit flush on the stand, but rather lean to its side a bit. The stand is still solidly stable, but the lean also provides a better view of the whole thing.

I was similarly flummoxed while building the speeder’s twin turbolasers, which don’t actually run straight along the length of the wings but rather at a slight angle. I was sure I’d done something wrong until I read the interview with designer Jordan David Scott in the accompanying instruction booklet.

It turns out the guns are designed to slant inward so that they focus at a point straight ahead of the speeder. “This was a lot harder to build than I thought it would be,” Scott says. “At first glance it might not seem apparent, but they are in fact built on a very slight angle of about 10-15 degrees.”

The hefty instruction booklet is indeed full of interesting information about the Snowspeeder, which is in fact a modified T-47 Airspeeder. Built by the Incom Corporation, the same manufacturer behind the X-Wing, the T-47 was originally used for industrial cargo transport but was modified by the Rebel Alliance for fast patrol and combat.

The Rebels also added armor plating to make up for the speeder’s lack of shields, as well as heaters near the drive units to prevent icing. And of course, they also added a harpoon gun, all the better to take down those heavily armored AT-AT walkers on Hoth.

Speaking of, Lego has painted itself into something of a corner with the UCS Snowspeeder. The only way it can really be complete is with a UCS AT-AT, fully to scale, to complement it.

I, for one, would love to see such a thing become reality, but it would easily be the biggest and most expensive Lego model ever made. Here’s hoping?