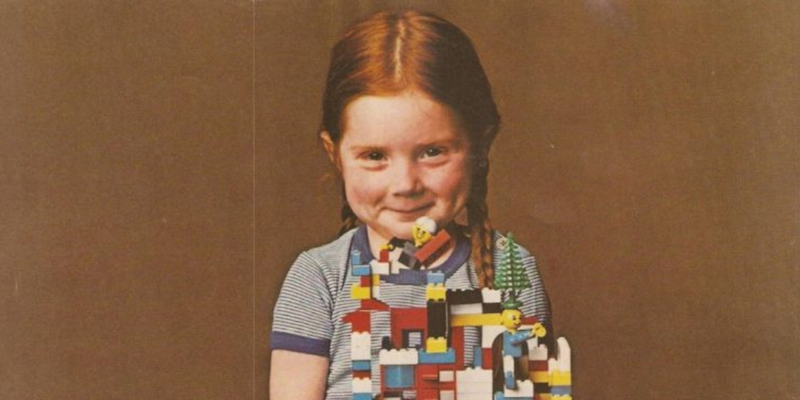 In 1981, Lego made headlines with the “What it is is beautiful” campaign that showcased the creative imagination of a little girl in blue jeans. In the ad’s copy, Lego drove home the heart and soul of its little blocks, “Have you ever seen anything like it? Not just what she’s made, but how proud it’s made her. It’s a look you’ll see whenever children build something all by themselves. No matter what they’ve created.” For years that’s how it was with Lego.

But after decades of offering simple building sets for children of any gender, the company’s focus slowly changed. It moved toward action-themed sets aimed at boys, often leaving young girls out of product and marketing plans. When fourth and fifth graders from Shorewood Hills Elementary School in Madison, Wisconsin, questioned Lego in 2013 about why it made more sets specifically aimed at boys, its response was thoughtful. “It’s true we currently have more male than female mini figures in our assortment,” wrote Steve Clines of Lego Service. “We completely agree that we need to be careful about the roles our female figures play—we need to make sure they’re part of the action and have exciting adventures, and aren’t just waiting to be rescued.”

In the years since, Lego has improved, offering a wider range of sets featuring female characters in different roles, both as professionals and adventurers. Lego made an effort to have more inclusive toys, ensuring whether young girls are into fighting evil or having a tea party, Lego will have a toy for them.

What are the best Lego sets for girls?

The truth is you can’t go wrong with any of them. But to help narrow down some options for the little creative genius in your life, here are some top picks to get you started.

As fun as Lego sets are, there’s nothing like sitting down with a big box of blocks and just building until you figure out what you’re making. It’s at the heart of Lego’s recent viral marketing campaign #kronkiwongi. The company asked children to make a Kronkiwongi. It didn’t matter to the kids that Kronkiwongi is a made up word. They let their imaginations go to work. Marketing is usually hit and miss, but this video shows exactly why the classic big box of Lego has been so loved for so long. Kids already have the instructions inside their imaginations; this box just gives them to pieces to bring their creations to life.

Lego’s Friends line features slightly different figures than the traditional yellow blockheads you grew up with. Instead of the usual yellow figures, the Friends figures feature more realistic designs. Each Friends playset combines classic Lego building with real-world hobby and adventure settings. From photography to a theater school, the Friends sets offer a broad range of play possibilities, but the Horse Vet Trailer, in particular, stands out. This combination SUV/hospital/horseback riding extravaganza hits many major aspects of Lego adventure play. It’s a fortress that’s also a vehicle with horses inside it. Save horses with medicine and science, ride them with the included saddle, and then drive away into the sunset.

For the Disney fan in your home, Lego has made it easy to play as your favorite heroine, whether you want to rule an island or save a kingdom. Sets are available to build Belle’s castle or help Rapunzel escape her tower, but if you’re looking for adventure, we suggest Moana’s Ocean Voyage. This set comes with highly detailed figures for both Moana and Maui, a canoe and transforming Te Fiti island to build, accessories, and a miniature Heihei the Rooster. Dodge cute-but-dangerous Kakamora flung from the included catapult, and navigate Moana to Te Fiti island. Once there, use the heart of Te Fiti to change the island from furious to peaceful.

This 387 piece treehouse set features three different build forms, providing multiple templates for children to play with and build. Unlike the previous two sets, the Creator line comes with traditional Lego minifigures, in this case, a young boy and girl. These co-ed adventurers have plenty to do once their treehouse is built, thanks to the included water guns, tools, and even a treasure map. Build a bridge between your different treehouses, or connect them all to make a treehouse village. The Creator line leaves it up to you, letting you find your adventure without violent trappings.

The City Police starter set feels like a heist movie in a box. There’s a cop car, a money-dispensing ATM, and—thankfully—equal representation of the characters, with a female cop and robber, and a male cop and robber. It’s nice to see Lego making sure that no matter what their gender, kids can find themselves represented as Lego heroes and villains. This set also features a police dog, dynamite, a jackhammer, and handcuffs.

According to Microsoft, women make up 40 percent of Minecraft players. The open-world building adventure encourages creativity and imagination, just like Lego, so it was only a matter of time before the two joined forces. If your daughter is already obsessed with Minecraft, but you’re trying to keep screen time down, consider Minecraft Lego. There are sets of all sizes and prices, but The Fortress stands out as a mid-range kit with plenty of options. Add water and farming areas to your kingdom and ready your defenses for the skeletons that come at night. Minecraft fans will appreciate touches like pressure plates that open doors and torches for nighttime patrolling. While this set only comes with a Steve figure, female characters can be added with separate packs.

We’ve covered Lego’s DC Super Hero Girls line in the past, but it’s worth highlighting one more time. These sets are based on a popular YouTube series that combines Saved by the Bell-style high school drama with super action. Some of these sets like Wonder Woman Dorm focus on the daily lives of your heroines, which in Wonder Woman’s case seems to include keeping her motorcycle in tip-top shape. If you’re in search of more action, the Batgirl Batjet Chase lets you tag along with Barbra Gordan as she chases down an evil Kryptomite figure. The figures in these sets are sculpted to match their characters like the Friends and Disney lines. If the little girl in your life was inspired by Wonder Woman this summer, here’s a set that puts her in the hero’s shoes.

For some the draw of Lego isn’t playing pretend, but the thrill of creation. Lego’s Architecture line features complicated builds of famous world landmarks. The London kit features 468 pieces and recreates the National Gallery, Nelson’s Column, the London Eye, Big Ben, and Tower Bridge in one beautiful diorama. These sets are particularly useful for children trying to learn the ropes of adding details to building design.

Lego Elves is a fantasy action world, part of the company’s efforts to appeal to girls across a broader range of genres. Ragana’s Magic Shadow Castle is a three-story building full of trap doors, bridges, hidden areas, and mystic animals. Part action playset, part doll house, the Elves sets know your Elves are going to need a hangout after all the magical warfare. While pricey, this 1,014 piece set comes with a host of accessories and three different minifigures to play with. If you’ve got a burgeoning Tolkien fan in your home, this is a great foundation for magical adventures.

At $349.99 the Mindstorms robot kit is easily the most expensive set on this list, but you get a remarkable crash course in the basics of programming and robotics for your money. Mindstorm is a Lego kit that comes with a built-in programmable engine. Using the set’s smartphone or computer apps, your little engineer can learn the basics of programming, teaching the robot how to pick up objects or run around a room. It’s a fun way to learn about programming methods, and in the end, you’ll have a little robot pal. When you want to play without programming it first, the Mindstorms robot can also be controlled via smartphone app.

Set for release on Nov. 1, the Women of NASA set highlights some pioneers of aeronautics and space exploration: astronomer and educator Nancy Grace Roman; computer scientist and entrepreneur Margaret Hamilton; astronaut and physicist Sally Ride; and Mae Jemison, an astronaut, physician, and engineer. The 231-piece set includes a posable Hubble Space Telescope and a launchpad, among other fun collectibles. The best part? It’s only $24.99.