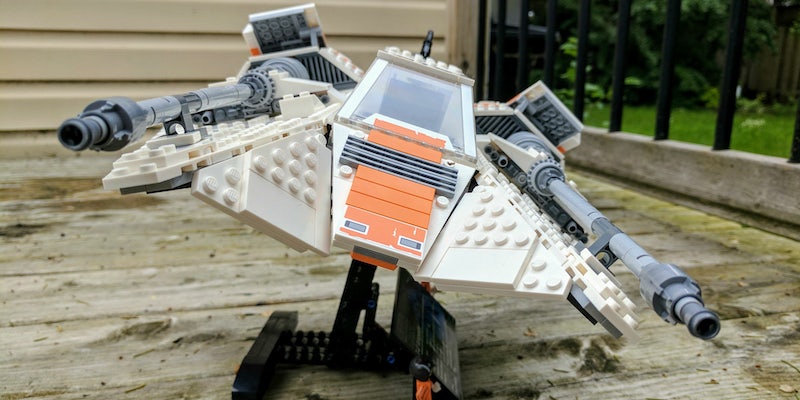 Everybody loves Lego, but each year the company has breakout stars in its lineup of new sets. Some of them are exceptional for their size and detail, while others improve on previous set ideas. Below we’ve list the best Lego sets of 2017 in no particular order because your own favorite will depend on your tastes and preferences. The good news: You can’t really go wrong with any of them.

The latest from the Lego Ideas line, which are models designed and submitted for consideration by everyday Joes and Janes, the Saturn V commemorates the NASA rocket that first put people on the moon. The $199 model itself is impressive. With 1,969 pieces and standing nearly 40 inches tall, it’s the biggest Ideas set yet. That might explain why it’s so hard to find.

There have been many previous Lego Batmobiles, but none were quite as awesome as the new “Ultimate” version. Verging on the absurdism of The Lego Batman Movie that it’s based on, the $139 Ultimate Batmobile is actually four vehicles in one. It splits into the aforementioned car, plus Batwing, Bat-Tank and Batcycle. As if that wasn’t enough, it also comes with a working Batsignal that lights up. Holy kitchen sink, Batman!

Speaking of kitchen sinks, the Creator line’s Assembly Square has it all. Three adjacent buildings pack in a bakery, florist shop, cafe, music store, photo studio, dental office, dance studio, apartment, and rooftop terrace. The $279, 4,002-piece set celebrates 10 years of Creator’s modular buildings and attaches to each of the other entries, including the Parisian Restaurant, Town Hall, and Palace Cinema.

There are plenty of gorgeous buildings in the world that could qualify for Lego’s Architecture line, but the latest honor goes to New York’s Solomon R. Guggenheim Museum. The $79 set faithfully recreates architect Frank Lloyd Wright’s modernist masterpiece, from its space-age curved facade right down to the yellow cabs on the street out in front. Now if only Lego would release a set that recreates all of Manhattan at full scale.

Lego designers have developed a habit of revisiting older Star Wars vehicles in order to turn them into bigger, better Ultimate Collector sets. The Snowspeeder, from The Empire Strikes Back, is the latest to get the treatment—and it’s amazing. The $199, 1,703-piece is indeed bigger and better than previous sets in every way. With working air brakes and a leaning display stand that shows off the vehicle in an action pose, the only thing missing is a suitably enormous AT-AT for it to battle.

Not every awesome Lego set has to be big, but pretty much every Star Wars entry is. Despite getting only fleeting screen time in The Force Awakens, that includes the Jakku Quadjumper. It’s the compact, four-engine ship that Rey and Finn initially run to in their attempt to escape from the First Order, only to eventually settle on the Millennium Falcon after it’s blown to bits by TIE Fighters. The $49, 457-piece set is even film-accurate—press a button and its engines explode.

A fully working Lego Carousel? Heck yeah. The latest addition to the Creator line features a full midway-style carousel. It comes complete with a big white swan and five moving animals, including a tiger, elephant, flamingo, and frog. The $199, 2,670-piece set uses Technic pieces to create a crank that, when turned, rotates the ride and moves the animals up and down. Builders can also add a Lego motor, sold separately, to fully automate the carousel.

Ten years after Lego released a 5,195 piece Millennium Falcon set, it’s back with an even bigger and better build that’s perfect for Star Wars fan. Coming in at 7,541 pieces, it’s the largest Millennium Falcon set Lego has ever released with plenty of attention to detail that smaller models don’t have the room or pieces to achieve. It includes figures (and the satellite dishes) from both the original trilogy and the newer films and will cost you $799.99. —Michelle Jaworski

Brickrolled is a Lego review column by Peter Nowak. You can read about his previous builds here.