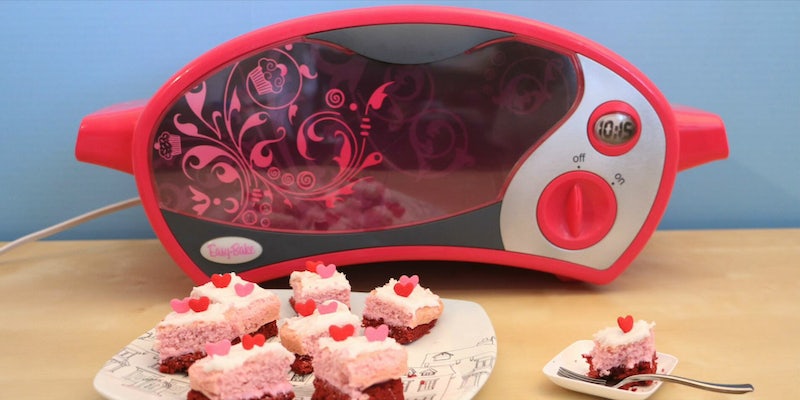 Screengrab via Toy Reviews For You/YouTube

10 fascinating facts about the Easy-Bake Oven

This immensely popular toy has cooked up a wild history.

The Easy-Bake Oven has become one of the most beloved household items since it hit the market in 1963. More than 30 million units and 150 million mix refills have been sold, making it one of the most popular toys of all time. A reliable crowd-pleaser during the holidays, the Easy-Bake Oven is now a member of the National Toy Hall of Fame, but its cultural relevance isn’t limited to mere nostalgia. Millions of people still watch Easy-Bake Over recipe videos on YouTube.

Let’s take a look back at the sweet history of the Easy-Bake Oven.

10 things you didn’t know about the Easy-Bake Oven

Today’s versions of the toy oven can be purchased at major retail stores or online at a reasonable $45.00, but the original 1963 version was much more expensive. In fact, it cost a hefty $15.95.

That might not sound like a lot, but adjusting for inflation, it amounts to $127. Despite the price, the Easy-Bake Oven sold half a million units in its first year on the market.

It might sound like an impressive feat for Kenner to have created a mini oven back in the 1960s, but other companies had already released similar toys decades earlier. Model train manufacturer Lionel created a gorgeous porcelain electric stove and oven combo in 1930 that featured a cooking surface the perfect height for kids, aged 6 to 9. The appliance, which the company claimed was built “as substantially as the one Mother uses,” sold for $29.50 ($430.00 today), according to an ad in a 1930 Playthings magazine.

The company ceased its production after just one year due to poor sales caused by the Great Depression.

Other name brands like Little Lady, Little Chef, and Suzy Homemaker sold toy ovens before Kenner, but none were able to capture the hearts and minds of children like the Easy-Bake Oven.

Kenner Products started making Easy-Bake Ovens as an independent company in 1963. It was purchased by General Mills a few years later, then by Tonka (the folks with the trucks) in 1987, and finally Hasbro in 1991.

Some of Kenner’s most successful years were under General Mills when it was granted the rights to make action figures for the Star Wars trilogy. More than 100 unique Star Wars action figures were produced and at least 300 million were sold between 1978 to 1985. Kenner is often credited for popularizing the 3.75-inch action figure (1:18 scale) during that period. The size became the industry standard for more than 20 years before 5- to 6-inch figures took over in the ’90s.

The action figure scale has seen a resurgence in recent years with new lines from DC, G.I. Joe, and Star Wars.

4) Kenner originally wanted to name it the ‘Safety-Bake Oven’

Electric ovens made prior to the Easy-Bake Oven had a reputation for being unsafe. Kenner solved that problem by using a standard incandescent light bulb, a product already found throughout homes, as the primary heat source. The company wanted to further convince parents its product was safe by naming it the Safety-Bake Oven, but regulatory bodies in charge of print and radio advertising reportedly shot down the idea because the oven didn’t yet have a track record for being safe, according to Todd Coopee, author Light Bulb Baking.

A ban on conventional inefficient incandescent light bulbs phased in between 2012 and 2014 made some people question the future of the Easy-Bake Oven. While the regulations didn’t ban any specific bulb types, it did require new fixtures to be 25 percent more efficient, which meant they would no longer give off enough heat to power the workable toy. Determined to keep one of its best-sellers alive, Hasbro released the Easy-Bake Ultimate Oven, which uses a heating source similar to a conventional oven. The Ultimate Oven edition can still be purchased today for around $45.

In February 2007, Hasbro recalled 985,000 Easy-Bake Ovens after receiving 29 reports of children getting their fingers stuck in the door. By July, the number of reports had reached 249, forcing Hasbro to issue a second recall for another 1 million units. One 5-year-old child sustained burns so severe that part of her finger had to be amputated.

The recall affected Easy-Bake Ovens sold between May 2006 and July 2007. The model that was recalled was made of purple-and-pink plastic, and it resembled a kitchen range with four burners on top and a front-loading oven. Hasbro gave affected customers a container to ship the oven back in, and a $32 voucher for another Hasbro product (the recalled unit retailed at $25).

7) The oven became a television superstar and pop culture icon

Hasbro’s immensely popular toy appliance is also an actor with a pretty impressive resume. It made appearances in How I Met Your Mother, MadTV, and Seinfeld. In season 4 of Fringe, Dr. Walter Bishop makes a lemon cake with his Easy-Bake to help solve a mystery. It is also referenced by Monica in the third season of Friends who says becoming a real chef “has been, like, my dream, since I got my first Easy-Bake Oven and opened Easy Monica’s Bakery.”

Yes, even the First Lady couldn’t resist the appeal of a working miniature oven. In a special Christmas visit to the White House, Oprah asked Michelle Obama if she remembers what her favorite Christmas gift was as a child.

The First Lady said a “metal doll house with plastic furniture” before remembering her Easy-Bake Oven. But she didn’t seem all too impressed with the toy, “Oh, I did have an Easy-Bake Oven. But you know, once you run out of the mix—you’re done with it.” Her problem-solving husband then asked if you could just purchase new mixes, to which his wife replied, “When we were little, what you got is what you got. When it’s over, it’s over.”

It wasn’t much more than an Easy-Bake Oven with a paint job and what Hasbro foolishly believed were recipe names boys would appreciate. Powered by a single 100-watt light bulb, the ill-fated Queasy-Bake Cookerator was unable to convince boys that toy ovens weren’t only for girls and was discontinued soon after its release.

10) A teenage girl successfully petitioned for a gender-neutral edition

A Change.org petition created by a teenage girl in 2012 led Hasbro to create a gender-neutral version for its Easy-Bake Oven. McKenna Pope, 13 at the time, received more than 40,000 signatures and the support of celebrity chefs. Hasbro responded by releasing a black, silver, and blue toy oven after meeting with the New Jersey teen. At the time, the Easy-Bake Oven was only available in pink and purple, though previous editions did come in a number of less gendered colors, like green, yellow, and blue.

Pope created the petition after she was unable to find a gender appropriate Easy-Bake Oven for her four-year-old brother, “we soon found it quite appalling that boys are not featured in packaging or promotional materials for Easy-Bake Ovens—this toy my brother’s always dreamed about. And the oven comes in gender-specific hues: purple and pink. I feel that this sends a clear message: women cook, men work.”