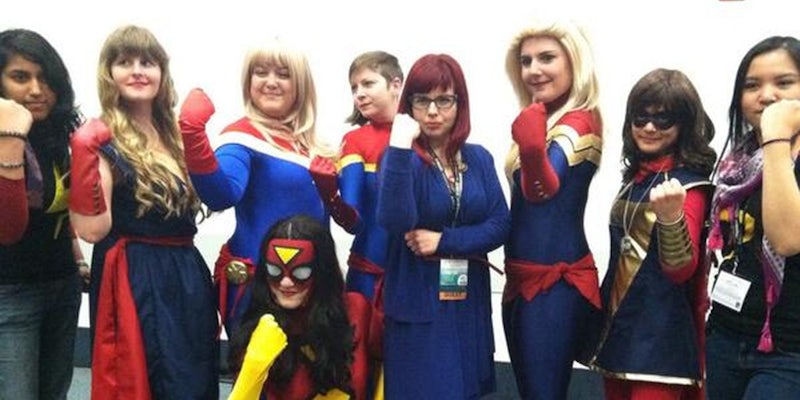 "You’ll go mad trying to figure out what people want. I don’t bother. I write the stories I want to read."

Kelly Sue DeConnick wants her work to do the talking.

A force of nature in the comic book world, she currently writes Avengers Assemble and Captain Marvel for Marvel; Ghost for Dark Horse Comics; and Pretty Deadly, an original collaboration between DeConnick and illustrator Emma Ríos—often juggling multiple deadlines at once. Her latest work, Bitch Planet, a series about a prison planet for women that plans to play with the tropes of prison movies from the ’60s and ’70s, is set to come out in November. She’s translated more than 100 volumes of manga and has also written a number of one-shots and miniseries, such as Osborn: Evil Incarcerated and Sif.

We named her one of the Top 10 people who changed fandom in 2012 and for good reason. Under her direction, Marvel relaunched Captain Marvel with Carol Danvers, the former Ms. Marvel, as the titular character. Carol’s turn as a highly complex character was hugely successful and her fanbase, the Carol Corps, quickly spread as more people discovered and shared the comic. DeConnick interacted with fans through Twitter and Tumblr as people shared fanart and cosplay photos inspired by Captain Marvel.

Fans of Pretty Deadly, a much younger series, have also produced fanart and even songs about the characters.

But DeConnick has also been an outspoken supporter for geek culture, especially when it comes to strong female characters and diversity in comics. She’s been frank about the sexism she and other women in the comic book industry face in a male-dominated field. She made her own way to a successful career, and she’ll stand up for herself to those who think otherwise.

She even has her own version of the Bechdel Test, which she calls the Sexy Lamp Test. Basically, “If you can remove a female character from your plot and replace her with a sexy lamp and your story still works, you’re a hack.”

“I am willing to make other people uncomfortable so my daughter won’t have to,” she said at New York Comic-Con last year.

We talked to DeConnick about the Carol Corps, her work on Captain Marvel and Pretty Deadly, and how we can change the conversation about female comic book characters.

How did you discover the Carol Corps, and what’s it been like interacting with them online and at the conventions?

I’m not sure about the discovering thing. They’re an incredibly generous and inspiring group of people to interact with, though. And if you’re new to comics, you absolutely could not have a better welcoming committee.

How does writing on an existing story compare to writing one of your own?

With Marvel, I obviously don’t own the characters so there are levels of approval to go through. But I’m very seldom told no and never without reason. Maybe I’ve just been lucky, I don’t know, but I don’t think it’s as frustrating as people generally imagine.

I act as though I own it all while I’m writing, I think. I hope, anyway.

And you know, I’m not an artist, so I work collaboratively on everything—so on Captain Marvel I need to run my plans by Marvel editorial for approval and David Lopez, the artist, and I talk a lot about the book and the character. On Pretty Deadly, Emma Ríos and I have final say, but she and I still need to be on the same page.

The metaphor I favor is an exercise one—it’s like one is weight-lifting and one is aerobic activity. For balance, to be at your healthiest, you want to do both. But on different days, for different reasons, I may favor one over the other.

What’s something people can look forward to with Carol Danvers in future issues?

What’s the writing process like when it comes to working on your various projects? Do you work on one at a time or work on some or all of them when an idea hits?

Because of the nature of monthly comics and deadline, I pretty much have to work on whatever’s on fire, I’m afraid.

You’ve said that your newest project, Bitch Planet, is a riff on the “exploitation prison tropes” from the low-budget ’70s movies. What do you hope to get across in the story, and what can people expect?

What was your inspiration to writing Pretty Deadly?

We started out wanting to Japanese pinky violence meets Spaghetti Western, but as I saw Emma’s designs the thing started to evolve in my head. It’s something uniquely its own now and I love that.

What do you think the success of Captain Marvel and Ms. Marvel in particular says about people’s wish for diverse characters and the misconception that only boys are reading comics—especially when it’s something creators are saying again and again?

I have no idea. You’ll go mad trying to figure out what people want. I don’t bother. I write the stories I want to read.

What’s the biggest issue in the comic book industry?

The direct market model and returnability.

With projects like We Are Comics gaining traction and more people speaking out against the sexism in geek and comic book culture. How do you think that it’s making a difference?

It’s too soon to tell, I think.

I want to point something out here though—comics used to be for everyone. This absurd notion we have now that comics are for dudes is a relatively recent development. This movement—if we can call it that—to open up the readership isn’t a radical shift so much as a restoration.

Women are getting bigger roles in superhero movies (although not one of their own)—yet they are only reduced to how they look in a leather suit or the decision to shave one’s head for the role in interviews. How do we change that conversation?