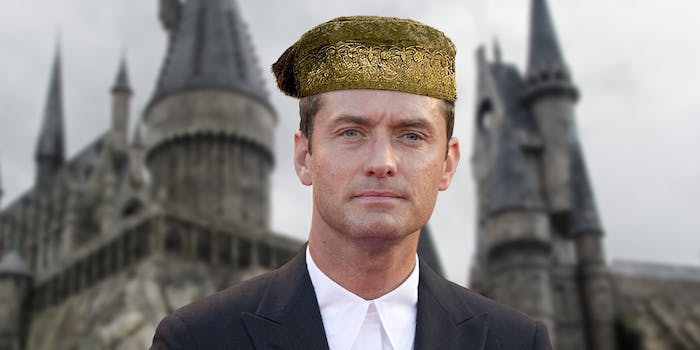 The Young Pope will now play a young Dumbledore.

The Fantastic Beasts films have finally found an actor fit to take down one of the wizarding world’s darkest wizards.

Warner Bros. announced Wednesday that Jude Law will play a Young Albus Dumbledore in the second Fantastic Beasts movie. This Dumbledore, a Transfiguration professor at Hogwarts prior to becoming Headmaster who has a special relationship with Newt Scamander, will be a much different one than the one we meet in the Harry Potter films.

Director David Yates previously confirmed Dumbledore’s appearance in the movies, and he’s certainly got some big shoes to fill. There’s a great likelihood that we may see the famous duel between Dumbledore and Gellert Grindelwald, the dark wizard and former friend who he fell in love with, in 1945. (The timeline of Fantastic Beasts, a 19-year period starting in 1926, also supports this.)

“Jude Law is a phenomenally talented actor whose work I’ve long admired and I’m looking forward to finally having the opportunity to work with him,” Yates said on Pottermore’s website. “I know he will brilliantly capture all the unexpected facets of Albus Dumbledore as J.K. Rowling reveals this very different time in his life.”

Warner Bros. also had nothing but kind words for Law.

“As fans ourselves, we are thrilled to have Jude Law joining the ‘Fantastic Beasts’ cast, playing a character so universally adored,” Toby Emmerich, president and chief content officer of Warner Bros. Pictures, said in a statement. “Jude has been a member of the Warner Bros. family for years and we’re excited to embark on this new adventure with him.”

Having most recently appeared in HBO’s meme-friendly The Young Pope, Twitter quickly combined the two as Law fulfills a particularly unusual subset of typecasting.

You guys. It's not Young Dumbledore. It's YOUNGLEDORE. Everyone knows that.

Law’s casting will reunite him with The Imaginarium of Doctor Parnassus co-star Johnny Depp, who plays Grindelwald. But it’s also reigniting calls from some fans and critics for Warner Bros. to recast Depp—who appeared briefly in Fantastic Beasts—due to allegations he abused his ex-wife, actress Amber Heard.

Filming for the second Fantastic Beasts movie will begin this summer, and it will be released Nov. 16, 2018.