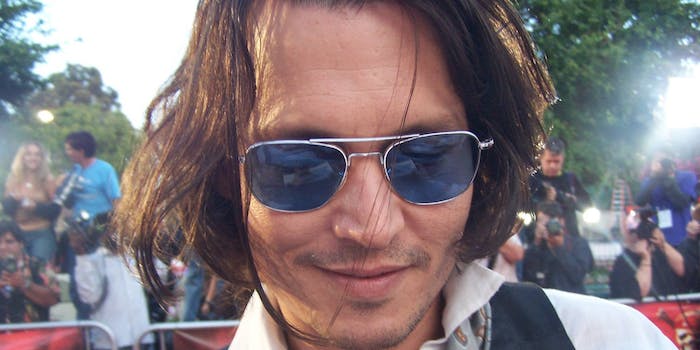 Fans are speculating that Depp is playing the dark wizard Gellert Grindelwald.

Johnny Depp has an undisclosed role in Fantastic Beasts and Where to Find Them, and that news is not being welcomed with open arms by Harry Potter fans.

Deadline revealed Tuesday night that Depp filmed a cameo scene for Fantastic Beasts, and will have a more significant role in the sequels. Speculation suggests that he’s playing Dumbledore’s dark wizard frenemy Grindelwald, who would be in his forties during the 1920s time period of Fantastic Beasts.

Depp’s involvement was met with a deluge of backlash on Twitter, mostly precipitated by his domestic abuse allegations earlier this year. After an acrimonious divorce including accusations of physical and emotional abuse, Depp’s ex-wife Amber Heard donated her $7 million settlement to charity, split between the ACLU for work involving abuse survivors, and the Children’s Hospital of Los Angeles.

For many, Johnny Depp is the new poster boy for white male privilege in Hollywood: an A-list star who is dogged by domestic abuse allegations, and routinely stars in box office flops—yet keeps getting high-profile roles. This is especially galling in the context of Harry Potter, a family-friendly franchise created by a self-described feminist. It doesn’t help that Fantastic Beasts has already been widely criticized for its all-white cast of main characters.

A lot of fans are clearly disgusted by Warner Bros.‘ decision to hire an actor with such a controversial history. However, there’s one detail that complicates matters even further: the timing of Depp’s casting. While his involvement was only revealed this week, Fantastic Beasts‘ first trailer was released in April—a month before Amber Heard filed her restraining order against Depp in May.

A film of this scale requires several months of post-production work, meaning Fantastic Beasts may have finished filming before Depp’s domestic abuse allegations came to light. This would leave the franchise essentially stuck with him, unless the studio decided to break his contract, then recast and re-film any of his scenes at the last moment.