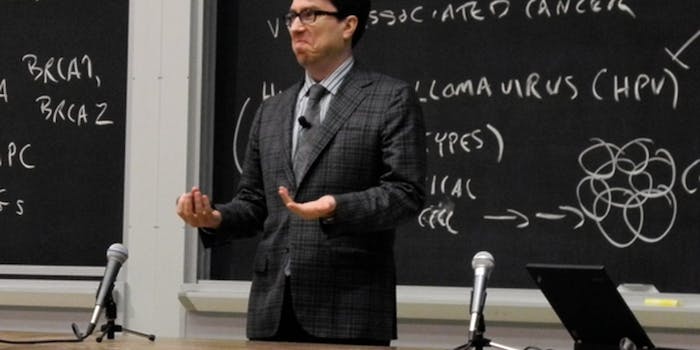 Jonathan Zittrain on memes and the fight against institutionalized cynicism

In his keynote address at ROFLcon, author and Harvard professor Jonathan Zittrain tackled  the odd intersection of memes, Internet culture, ethics, and law.

That was the ultimate question of Jonathan Zittrain’s keynote speech to open the 2012 ROFLcon at the Massachusetts Institute of Technology—punctuated with an army of image memes, inside jokes, and laughs.

“There’s something going on here,” Zittrain said at the conclusion to his speech, after an hour probing into the intersection of memes, Internet culture, ethics, and law, “that suggests that … there are other avenues for expression that have been made fluid, ready to pursue by the phenomena of the Internet meme.”

In other words: The meme is opening up new pathway for expression, powered by the Internet’s irreverent sense of humor.

You’d be hard-pressed to find a better keynote speaker for ROFLcon. A Harvard professor (at both the law school and the Kennedy School of Government), Zittrain’s got a mixture of pure geek background (he’s a former forum admin for CompuServe), great sense of humor, and intellectual heft that was a perfect fit for the audience.

Though Zittrain said he didn’t quite consider himself an Internet “ROFLcon person,” the audience’s warm reaction showed they very much disagree. His speech had less the atmosphere of a stilted academic hall than a rowdy comedy club for Internet geeks.

For ROFLcon attendees, Zittrain may best be known as the cofounder of the Berkman Center for Internet and Society, which studies cyberspace and, particularly, the intersection of law and the Internet. His 2008 book, The Future of the Internet and How to Stop It, portrayed a dark trajectory for the open Web, moving from a world where the generative, user-powered creative engine that powered the Internet’s growth is threatened by the proliferation of walled gardens of development—iPhones, xBoxes, and other devices that can be locked down by their manufacturers.

Zittrain’s parade of memes could be seen as the cultural equivalent of this. Memes are a part of generative culture, which sometimes poke and prod at the boundaries of institutions.

Among Zittrain’s many examples was a photo of the U.S. Senate, with this political statement in meme form: “This is why we can’t have nice things.”

Sometimes the culture moves into significant action—most prominently, as Zittrain noted, in the case of Anonymous and WikiLeaks. Citing the protests against the Stop Online Piracy Act, Zittrain noted there’s “an extra dimension to its power” when political commentary combines with a group’s common understanding of memes.

“The most countercultural way to deploy this force is against the un-funny cynicism of our mainstream institutions,” Zittrain concluded.

Check out a full liveblog of the keynote at The MIT Center for Civic Media’s blog.