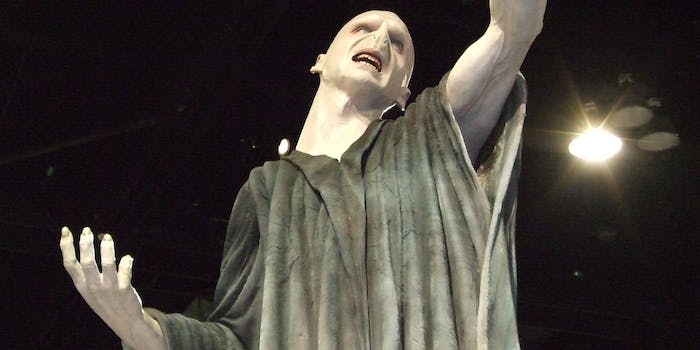 We’ve been mispronouncing Voldemort’s name all this time

The title is really He Who Must Not Be Named (Correctly).

If you’re a huge Harry Potter nerd, you’ve probably wondered before why Voldemort is pronounced “Vol-deh-mort” instead of “Vol-deh-mor.”

The Dark Lord’s name is obviously based on the French word for death, mort, which has a silent ‘t’ at the end. So why do the movies and fans all say the ‘t’?

If this conundrum describes you, then today is your day to feel validated: J.K. Rowling confirmed the ‘t’ should have been silent all along.

@Universe_Box One piece of Harry Potter trivia I always forget to mention: the "t" is silent in Voldemort, according to @jk_rowling.

… but I'm pretty sure I'm the only person who pronounces it that way. https://t.co/HxhJ5XY5HP

Her Highness has actually mentioned the pronunciation issue before, in earlier interviews that predate the movies. Apparently by the time the first film came out in 2001, she’d given up the battle and let the fans decide Voldemor(t)’s linguistic fate.

We have to say, though, that we think Voldemort is much scarier with the ‘t.’ Even if Lord Voldemort himself apparently doesn’t agree:

Yo my names Voldemort & the t is silent, but don’t say my name or imma get violent. #FreestyleFriday

Maybe we should all return to calling him He Who Must Not Be Named. Fear of a name only increases fear of the name itself, sure, but mispronouncing it?