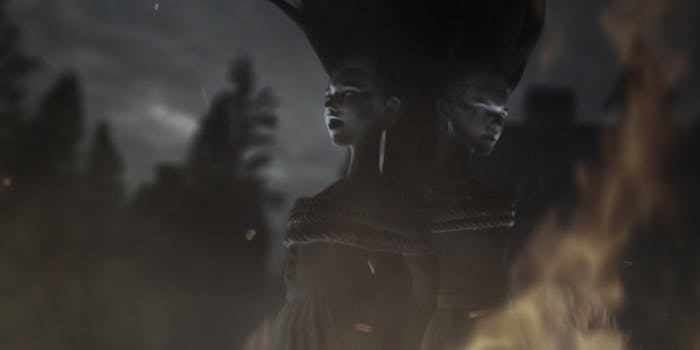 The Harry Potter author continued to share history lessons with her fans on Pottermore.

Hard on the heels of Tuesday’s history lesson, this morning J.K. Rowling released more information on Pottermore about the history of magic in North America. Where the first update dealt with the role of Native American magic in wizarding culture, today’s news took us into colonial America—the 17th century and beyond.

The biggest news for fans of the series revealed in today’s update involves the existence of a secret collective of ruthless wizarding mercenaries: the Scourers. These corrupt magicians fed into the religious paranoia that fueled the Salem Witch Trials.

According to Rowling, European wizards began immigrating to the continent in the early 17th century along with Muggles—or No-Majs, as they were called on this side of the pond. Like their non-wizard counterparts, these colonial witches and wizards had it rough. They had to forage for supplies for potions and other magical ingredients, and battle the harsh wilderness just like everyone else.

Many wizards “sought to blend in” the general population while others chose to “hide among the Native American wizarding population, who were generally welcoming and protective of their European brethren.”

In keeping with her assertion on Twitter that “there was mutual respect and a sense of kinship between all wizards, no matter what their race,” Rowling’s latest update places the blame for strife between Native Americans and colonial settlers at the feet of No-Majs, not wizards. In particular, the religious beliefs of the Puritan settlers “made them deeply intolerant of any trace of magic.” And feeding their paranoia was the terrifying group of Scourers.

It wasn’t easy to reconstruct the refined spaces and wizard societies of Europe. The magical infrastructure of colonial North America was rudimentary, with “no established wandmakers” and no law enforcement. “Ilvermorny School of Witchcraft and Wizardry, which would one day rank among the greatest magical establishments in the world, was at that time no more than a rough shack containing two teachers and two students.”

The lack of proper law enforcement or strong colonial government gave rise to the Scourers, who were a group of magical bounty hunters who came to the new world to find, capture, and trade wizards or wanted wizard criminals in exchange for gold. This system quickly turned corrupt, as the Scourers “were not above passing off innocent No-Majs as wizards, to collect rewards from gullible non-magic members of the community.”

These unscrupulous mercenaries encouraged the religious paranoia of the Puritans because they profited from it. In this environment, the frenzy of the Salem Witch Trials was inevitable. That tragic moment in U.S. history naturally had a huge impact on wizarding culture. Rowling explains:

The famous Salem Witch Trials of 1692-93 were a tragedy for the wizarding community. Wizarding historians agree that among the so-called Puritan judges were at least two known Scourers, who were paying off feuds that had developed while in America. A number of the dead were indeed witches, though utterly innocent of the crimes for which they had been arrested. Others were merely No-Majs who had the misfortune to be caught up in the general hysteria and bloodlust.

The Salem Witch Trials almost singlehandedly reversed the immigration trend that the magical world had seen up until that point. Wizards and witches fled North America in droves and didn’t really begin to return until the 20th century. The wizards who stayed, however, founded the Magical Congress of the United States of America in 1693—far earlier than the founding of the U.S. The congress instigated its own period of violence: Its members began trying and executing Scourers, many of whom went underground, married No-Majs, and raised lineages of No-Maj descendants who hated magic and continued trying to stamp it out.

“The vengeful Scourers, cast out from their people, passed on to their descendants an absolute conviction that magic was real, and the belief that witches and wizards ought to be exterminated wherever they were found.”

We can guess that these interesting political complications will have a part to play in Fantastic Beasts and Where to Find Them. Will descendants of the Scourers be pursuing Newt Scamander through New York City?