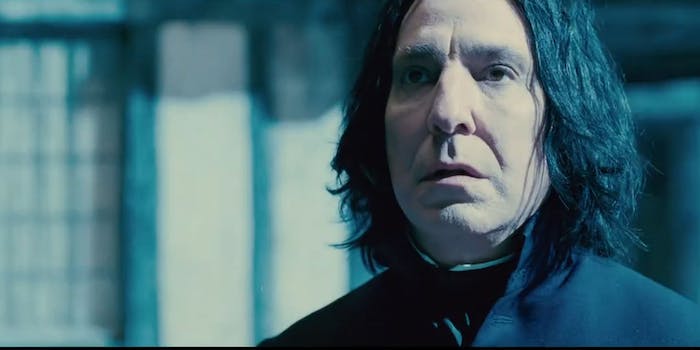 There are Jewish students and queer students in Hogwarts? It would have been nice to have read about them.

Were there Jewish students at Hogwarts? Does it matter? To the Harry Potter fans outraged over a response J.K. Rowling gave to the question on Twitter, the answer is undeniably yes.

Seventeen years after it was first published, Harry Potter still feels remarkably progressive. Hermione remains one of the strongest Young Adult heroines in history, and her ongoing commitment to social justice is a huge part of the story. Hogwarts school is notably diverse, featuring characters of Asian, Southeast Asian, and African descent. By the end of the series a black man is the magical equivalent of the UK Prime Minister. One of the most famous parts of the narrative involves a werewolf represented as a thinly-veiled metaphor for the AIDS virus. And of course, Dumbledore, the most powerful wizard in the Harry Potter universe, was also gay.

Given all this, it might seem odd that the Harry Potter fandom is currently exploding in outrage over Rowling’s Twitter comments about a boy named Anthony Goldstein—until you remember that the current iteration of Harry Potter fandom, raised on the cantankerous social justice politics of Tumblr and desperate for complex representation in the media they consume, reads these elements of the books a bit differently than the previous generation of fans.

For example, many readers might assume the news that Dumbledore was gay, which we all learned from a notorious interview Rowling gave a few months after the release of the last book in the series. But fans were, on the contrary, outraged that Rowling hadn’t actually written Dumbledore’s sexual orientation into the books as an explicit part of the narrative, particularly since his relationship with another character was a significant part of the final book. Rowling now faces a similar backlash from fans angry at what they see as her handwaving other issues of representation.

On Tuesday, Rowling took to Twitter, where she’s been making herself increasingly at home lately, to answer a wide variety of fan questions about the Harry Potter series. Most of her answers were as lighthearted as always. At one point she coyly identified Harry Potter’s classmate Dean Thomas as a potential Jedi Master:

.@joe_hook There's probably one in there. I wouldn't put it past Dean Thomas.

One follower asked her about Jewish wizards at Hogwarts. This was JKR’s response:

This isn’t the first time HP fans have heard of Anthony. He’s been known for many years to be one of the many minor characters in the Hogwarts universe, and appears by name in the very first Harry Potter book. On Twitter, the reaction was generally positive:

But there were other reactions, too—most notably, this one:

@jk_rowling @benjaminroffman just the one??

The question of whether JKR had really intended to imply that Goldstein was the only Jewish student at Hogwarts consumed Tumblr. The primary issue for many of them was that they wanted to know why JK Rowling hadn’t made it explicit that Jewish students and students of other, non-Christian religions, existed in the magical universe.

This is very similar to the complaints that Rowling erased queer characters from the books by refusing to explicitly portray Dumbledore as gay in the books, and by waiting until after the books were over (and he was dead) to reveal the information. At the time, her response to the overwhelmingly positive reaction from fans was, “If I’d known it would make you so happy, I’d’ve announced it years ago!”

Rowling also briefly acknowledged queer students at Hogwarts in her Twitter Q&As, in response to a fan’s hopeful statement they believed Hogwarts was an accepting place:

But many fans reacted with eyerolling to these attempts at embracing diversity at Hogwarts after the fact. On Tumblr, a post that snarkily summed up Rowling’s tweets quickly made the rounds:

Today’s fans, as we’ve seen from countless other similar backlashes, from Doctor Who to Supernatural, are fed up with being asked to wait for minority representation. In Harry Potter fandom, it’s an even more heated subject because the primary series is effectively over. Even though Rowling is adding more canonical tidbits to the universe all the time as a part of her ongoing Pottermore collection, many fans don’t consider these additions, or her elaborations on Twitter, part of the true source material.

Here’s a smattering of the widely varied reactions from fans:

but it means nothing because if it’s not written in the books then what’s the point of representation in the first place?

“There’s a difference between simply stating a fact—’Of course there are Jewish students at Hogwarts’ (which is what she actually said, in response to a question)—and making a grand statement or claim and expecting praise for it.”

And Seamus and dean

You know what I mean? Like actually writing it down into the books (to late now tho I guess)

dumbledore is not good representation. saying there was one jewish student at hogwarts years later is not representation. jkr wrote everyone in her story as cis and straight. no matter how much she learns later, the publication of the books are what millions of people grew up reading, and they have terrible representation in them.

Though Rowling’s themes are still acclaimed for their progressive stance today, plenty of thematic elements of her work have frustrated fans for years. For instance, while the rise of Voldemort was an obvious metaphor for Fascism, with its accompanying commentary on racism and even the Bush administration, fans have long seen Rowling’s own treatment of diversity and other races in her writing as flawed and problematic.  The goblin race has long been read as an anti-Semitic caricature, while the portrayal of some house elves as “enjoying” their slavery also came under criticism from fans. Giants, as well, are frequently read by fans as a somewhat sinister iteration of Rowling’s tendency towards fat-shaming and generally demonizing people based on appearance.

Plus, despite overtly condemning prejudice and classism, the books ultimately show an entire house of Hogwarts, Slytherin, being essentially classified as an innately “evil” house. The rest of the wizarding society never really tries to redress this status or integrate Slytherin students more effectively into the rest of the population.

Meanwhile, after many, many fans spent years reading the character of Remus as a thinly veiled queer character, the final two books showed him settling into a typically heteronormative relationship, married with children. To add insult to injury, his bride, Tonks, was a character many fans also initially read as queer and genderqueer because of her butch/punk appearance and shape-shifting abilities.

These things may all seem like minor quibbles, but in books as beloved as the Harry Potter series, they are anything but. Many fans have lived with these concerns for years, and seeing Rowling seemingly hand-wave them now was acutely frustrating for many of them.

Rowling, sensing she hadn’t been clear regarding Anthony’s status, quickly clarified on Twitter that he wasn’t the only Jewish student at Hogwarts:

OK, let me clarify that! Anthony isn't the first Jewish student, nor is he the only one. I just have reasons for knowing most about him!

.@indigo_15 Exactly. He's one of the original forty students I created in Harry's year.

But while Rowling may have kept Anthony close to her heart all these years, her answer still failed to satisfy many fans. Among them was Tumblr user lascapigliata, who described the ideal scenario for what she would have liked to see from Rowling in terms of representation:

Still other HP fans defended Rowling by pointing out the hypocrisy of their fellow Tumblr denizens, noting that getting mad at poor representation in Harry Potter wasn’t the same as paying attention to the real problems actual minorities face in real life. “I want you to do one of two things, if you don’t mind,” waltzfordeborah wrote:

1) Unfollow and/or block me (so I don’t I have to see your posts) if:
– You have ever bashed Israel without closely examining at both sides/political bodies (governing the two sides) of the Israeli-Palestinian conflict
– [You] refuse the believe that there are Arab Jews, or Israeli Muslims, and/or that either of the two groups supports a two-state solution
– You minimize/ignore the sociopolitical struggles bisexuals face in the LGBT movement
– You exclude trans women from your view of feminism, and/or minimize the socioeconomic and/or sociopolitical struggles transgender persons face on a daily basis

2) Renounce your title as a “Potterhead” or any sort of similar label because you are bratty, selfish, and don’t appreciate the political/social messages JKR tacitly included throughout the series.

Waltzfordeborah’s point is borne out even more by the works Rowling has written since Harry Potter. Her first adult novel, The Casual Vacancy, contained explicitly queer characters and tackled the issue of diversity and progressive politics so directly that numerous critics responded to it as a “socialist manifesto” or “leftist propaganda.” Perhaps even more telling is the murky and diverse world of Robert Galbraith, the pseudonymous pen name Rowling used to write her mysteries The Cuckoo’s Calling and The Silkworm. Cuckoo’s Calling included a complex gay character, delved into the world of homeless black youths in urban London, and featured socially conscious rap lyrics.

Still, it’s unlikely many of the Harry Potter fans who are angry at Rowling now have read these works. And even though the first Harry Potter book, in which Anthony Goldstein was briefly mentioned, was published in 1997, fans interacting with Rowling clearly see Hogwarts and its fictional students as a current issue that’s alive and well today.

“By the time she found a publisher, Harry Potter and the Philosopher’s stone had already been turned down twelve times,” brightsunnydaysofcastamere wrote. “Rowling obviously wasn’t in a position where she could keep a lot of controversial stuff in her books if her publisher didn’t want her to.

I firmly believe that Rowling intended to write a more diverse story, like she did in her other work.”

But if there’s one thing fandom has taught us, it’s that authorial intentions don’t matter when it comes to actually assessing the impact of a story on its readers—especially a story as huge as Harry Potter. And while it’s difficult to fault the staunchly progressive themes of anti-racism and equality in the Harry Potter books, that won’t stop readers from viewing it through fandom’s rapidly evolving standards of complex representation.

What is abundantly apparent from the backlash, however, is that fans are clearly invested in the idea of Hogwarts and the Harry Potter universe as one that reflects their own vision of the real world around them. Even if the Wizarding World is fictional, it means something to know fans are invested in making sure it’s a place where everyone is welcome.