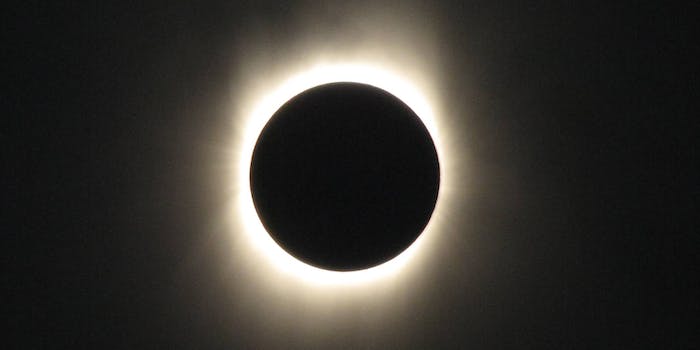 How to view a solar eclipse without hurting your eyes

Get your glasses, pinhole cameras, and travel plans ready.

In just under a year from now, on Aug. 21, 2017, most of the continental United States will be engulfed in a solar eclipse. Those lucky enough to be in a narrow band of the sun’s path will see the sun get completely blocked out by the moon for a few minutes as it passes in front.

‘Path of Totality’ for 2017 solar eclipse

Regardless of where you live, if you’re going to look at the sun you should take some precautions. According to Space.com, even a fraction of a second of exposure to the sun’s unfiltered rays can permanently damage your eyes. So how can you stay safe?

Get some eclipse glasses

Several companies offer cheap glasses specifically designed for viewing the sun at any time of year and for eclipses.

John Jerit, the owner of Eclipse Glasses, explained that a black polymer lens in his company’s glasses blocks out 100 percent of ultraviolet light and 99.9 percent of visible light. They’re about 10,000 times darker than regular sunglasses, and reduce “the sun to a small yellowish-orange circle,” he told the Daily Dot.

You can also invest in a pair of #14 welder’s goggles, according to Space.com, but those are pretty expensive.

Readers of a certain age will probably remember learning how to make a pinhole camera to view the eclipse. This still remains the safest way to view an eclipse since it does not require looking at the sun directly at all, but it takes some forethought and know-how. Thankfully, we won’t have to rely on memory. We’ve got YouTube now.

What not to do

If you have a telescope, make sure you have the proper filters set up to view the sun. Even if no one is looking through it, a telescope pointed at the sun without the right filters can start a fire.

Don’t wait to make your preparations, either. Jerit said when he went to view a solar eclipse in France, it took him 10 hours to drive 150 miles from the airport to the site where he viewed the eclipse. He anticipates many U.S. cities in the band of totality will likely be unprepared for the influx of tourism so book now and get there early.

Lastly, whether you choose to make a pinhole camera or buy some special equipment, do it early too. Be sure your pinhole camera works and you know how to use it, and be sure any eclipse glasses you get are certified by a safety board like the International Organization of Standardization or CE Sai Global.