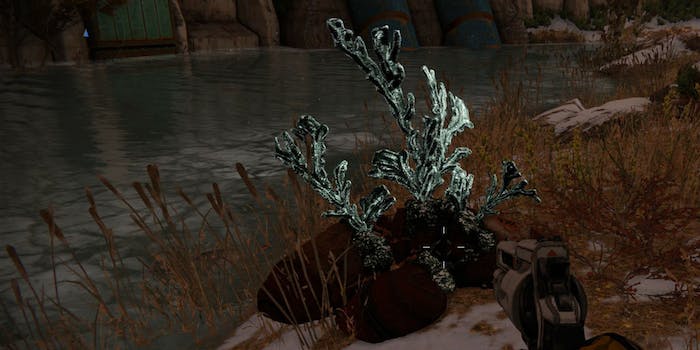 A video guide to the best resource farms in Destiny

Here's how to stock up quick.

The first time I ran across some glittering Spinmetal on Earth, I had no idea what it was or why I should care, which was a problem. Because later I realized I need Spinmetal.

I need it to upgrade my weapons and armor, so I can access and survive the endgame content. I also need Helium Filaments, and Spirit Bloom, and Relic Iron, and goddamnit I didn’t pay enough attention to that shit when I ran across it on Patrols and Strikes and now I need to go farm some. So I figured out a way to get it done quickly, and to have fun at the same time.

Destiny lets me scratch my MMO itch without demanding the regular, life-halting, multi-hour sessions that true MMOs require. And I know this in part because one of the things I love to do most in any MMO, like mining rocks or gathering herbs, is something I also get to do in Destiny, albeit while running and jumping and shooting the ever-living crap out of things. It’s the best of both worlds.

I can’t show you guaranteed and quick ways to get the rare resources needed to upgrade weapons and armor—I’d rob a school bus full of nuns if I thought it would get me a steady supply of Ascendant Shards—but I can show you how to get a metric fuckton of the basic stuff, while also earning Vanguard Marks, reputation points, and leveling up your weapons.

The first run takes place in the Rocketyard, in the Cosmodrome in Old Russia. If you’ve been running The Devils’ Lair Strike on Earth, you’ve driven through the Rocketyard probably dozens of times.

This run is unique among the other three in that you’ll probably spend the entirety of it on foot. That means a lot of up-close-and-personal time with the Fallen and the Hive, so this is a great place to rank up shotguns and fusion rifles.

The second run takes place in Archer’s Line, which is the area right up the hill from where you spawn in on the Moon.

While the Spinmetal run is a distinct route, the Helium Filament run is anything but. It’s more like running around like a chicken with your head cut off, checking every single place you’ve ever found a pile of Helium Coils or a loot chest, ever. They respawn quickly, so your searches will always deliver quick results.

The third run takes place in the Ember Caves area on Venus. This is the fastest run—a loop of the seven caves can take you no more than two minutes, depending on how many loot chests you have to dismount your Sparrow to collect.

This is also the easiest run to get killed on, if you’re not paying attention. There are plenty of Fallen Vandals with sniper rifles in the Ember Caves, and they usually have overlapping fields of fire. You’ll learn their positions and keep an eye out for them as you master this run.

The fourth and final run takes place in The Barrens on Mars. This is the smallest search area among the four runs. It’s dense with locations for loot chests, but the better you get at this run, the more time you might need to let the chests respawn.

That makes this a particularly good opportunity to rank up weapons. Sniper rifles and Scout rifles are sound choices, but there are types of enemies and engagement ranges applicable to rank up any class or type of weapon while you’re on the Relic Iron run.

You can make these runs when you have a pressing need for the resources in question, but they’re also something quick to do while you’re waiting for a friend to log on for a Strike or a Raid, if you need to kill time while a teammate runs to the bathroom, or if you just want to log in for a quick 15-minute session of Destiny.

Worst case scenario? You start piling up full stacks of Spinmetal, Helium Filaments, Spirit Bloom, and Relic Iron, that you can trade in for either Vanguard or Crucible Marks. These resource runs are a win/win, and I hope the videos come in handy.